The one thing you know about receiving an email from Titan Motorcycle Co. is you have no idea just what kind of custom bike you’ll find inside. The awarding-winning team headed up by Michael Siebenhofer and Thanh Ho Ngo relish in their role of turning up to a show and delivering a bike that nobody was expecting. From their new workshop in Graz, Austria, they now have the space and technology to turn bikes out at an incredible pace, while still maintaining their exacting standards. Their latest email was opened to reveal Titan No. 2 affectionally known as ‘The Shark’, a BMW R that’s ready to take a large chunk out of the competition.

Even in the earliest days at their old workshop, Michael and Thanh were never afraid to go against the grain. Happily reversing cylinder heads, fitting off-road rubber to big power street bikes and using designs and colours that set them out from the crowd. A cookie cutter operation this is not, but they also have an absolute commitment to quality and every bike that rolls out of the workshop operates exactly as you would expect a motorcycle to do, even if it looks crazy doing it.

For the shark build they dived into their enormous collection of mainly ’70s and ’80s bike parts and came away with enough from a BMW R45 and R75 to piece together the basics of one functional motorcycle. The fundamentals of the design they call a ‘stealth fighter’ and it all works around the frame that has been given an applied patina for a raw and organic look. With the right bushing and bearing changes made, a single-sided swingarm was slotted into place and the skeleton of their apex predator was ready.

There is no subframe change or modification as you see on most BMW R builds, instead a left field choice delivers a remarkable result. A custom leaf spring serves both as the subframe of sorts, as well as the seat support, still capable of providing some cushioning movement when required. But if that’s unusual then the material selected to make the tailpiece and seat structure above is equally as surprising. The shark like tail fin rear and the seats supporting base are all fabricated from lightweight titanium.

The hand made custom tank also uses the ultra-strong material and while the lines are sharp in areas, there is just the right amount of organic shape to compliment the rear for the animalistic look. The top lines of the piece are kept low, with the fuel filler still below the top clamp and all of this helps to accentuate the prominent tail. The front cowl is just as aggressive, with its downward facing styling giving the bike a menacing appearance. But all of this is somewhat softened by the contrasting colour choice, with the boys a big fan of fluro.

Turning the bike into a roller and it was back to the parts bank where a combination of Ducati 696 forks work with a Ducati 999 triple clamp to deliver an impressive front end. This only gets better when you kneel down and notice that stamped on the Brembo calipers clamping the twin discs are the letters M4. The rear end benefits from a custom built shock to suit the project and the BMW wheel is laced up with new spokes before being wrapped in aggressive TKC 80 rubber. The front is the polar opposite, a modern wheel with the signature fluro colour scheme wearing a slick.

To give the engine some real punch the boys didn’t muck around and tore it down in readiness for a Siebenrock Power Kit. With the new internals and barrels the capacity goes out to 860cc and more importantly the big jump in torque is all available as low as 2500rpm. Helping the big block engine breathe is a set of K&N pod filters and a one-off exhaust that looks a treat too. While the spark is brought into the modern age with a conversion to digital ignition.

The rest of the electronics are kept minimal and stripped down, with Kellermann turn signals upfront. The front and rear lights are all LED and shine out of the shark like features, giving a sinister glow at night. But it’s the final party pieces that really show off the Titan Motorcycle style, the not at all serious tank graphics are done in house by SHENFU and covering the seat is genuine Sturgeon fish leather. If strictly conventional is what you’re after, any dealer can help you out, but when you like to think outside the box and ride on your rolling imagination, then the guys from Graz have got you covered. 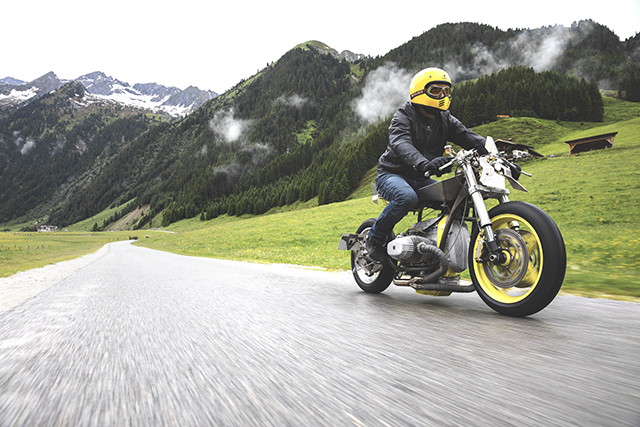 The wildest custom Goldwing you’ve ever seen, an incredibly rare Egli-framed Suzuki GT750, a BMW with Nissan Leaf power, and a seriously weird official body kit for the Honda Monkey. Egli Suzuki GT750 by Extremebikes We love a good detective story, especially if it has a happy ending—like the one involving this Suzuki ‘Water Buffalo.’ […]