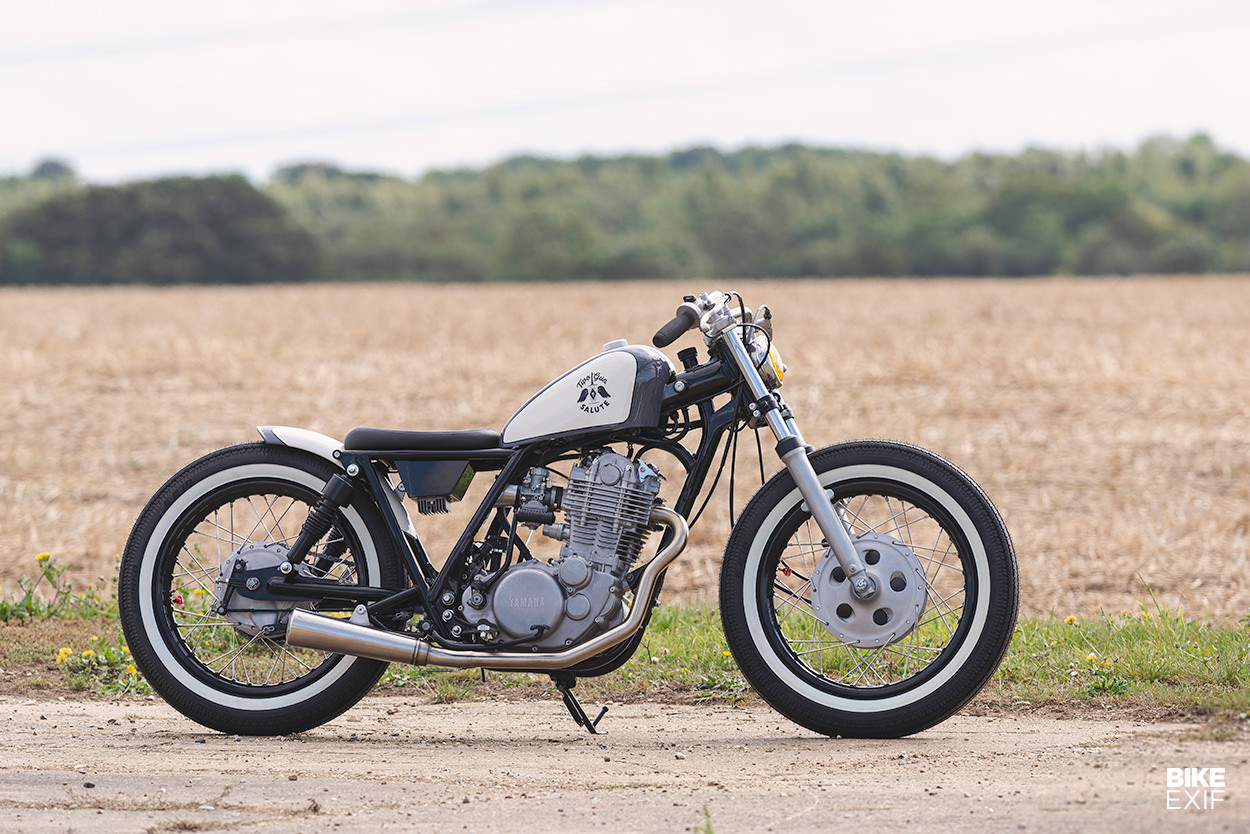 We’re huge fans of the Japanese custom scene. But it’s not just the motorcycles that captivate us: we’re also conscious of how Japanese creativity influences the custom scene around the globe.

Many elements of the universal flat-seated cafe racer genre originate in Japan—whether builders realize it or not. But this tasty Yamaha SR400 takes more than just a few cues. From top to bottom, it’s a deliberate homage to Japanese custom style. 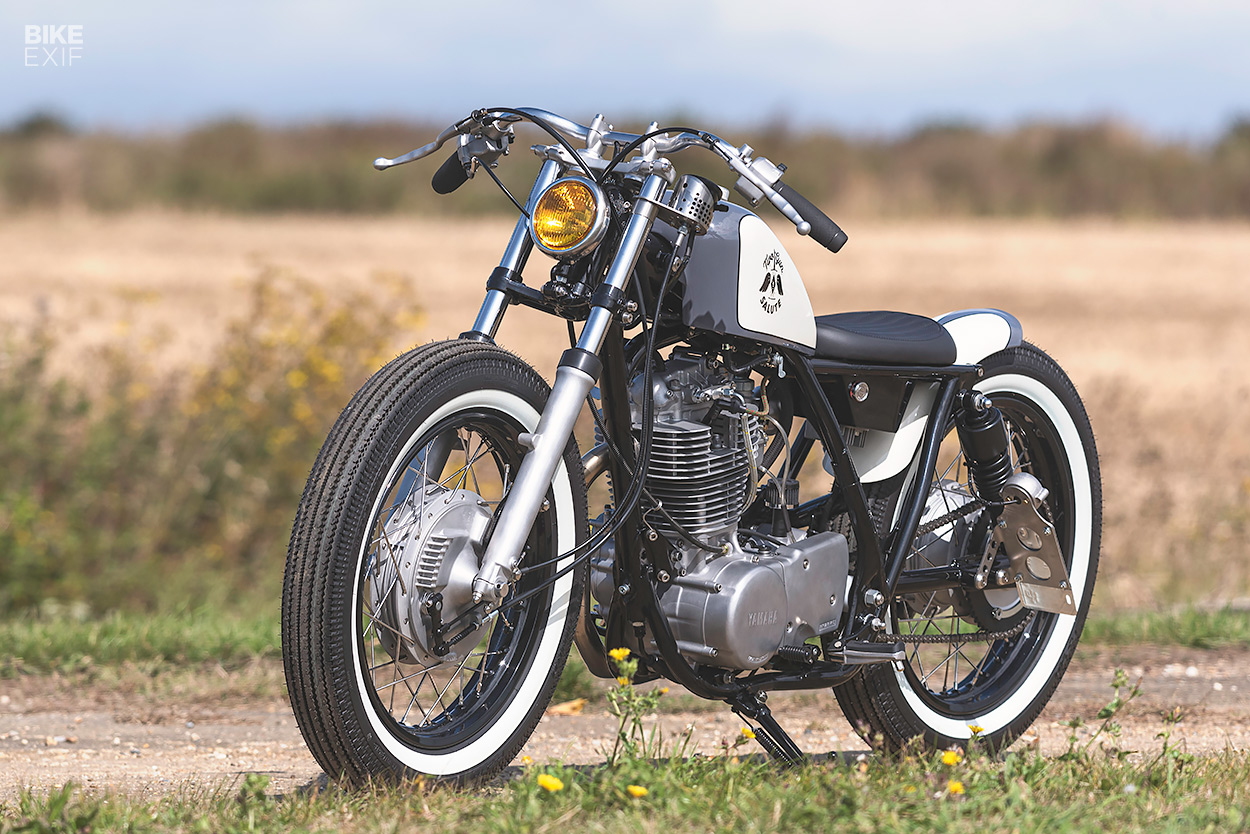 The project started as a collaboration between the small but feisty British apparel brand Two Gun Salute and custom shop Smith and Son Motorcycles. Two Gun Salute brothers Nathan and Sam Burton had long wanted to do a custom build to promote their label, but being a small brand, budgets were always tight.

Then Jamie Smith—a self-professed ‘shed builder’ who operates as Smith and Son Motorcycles near Peterborough—reached out to them via Instagram. The guys met up at the Hot Rod Drags at Santa Pod, and hit it off. 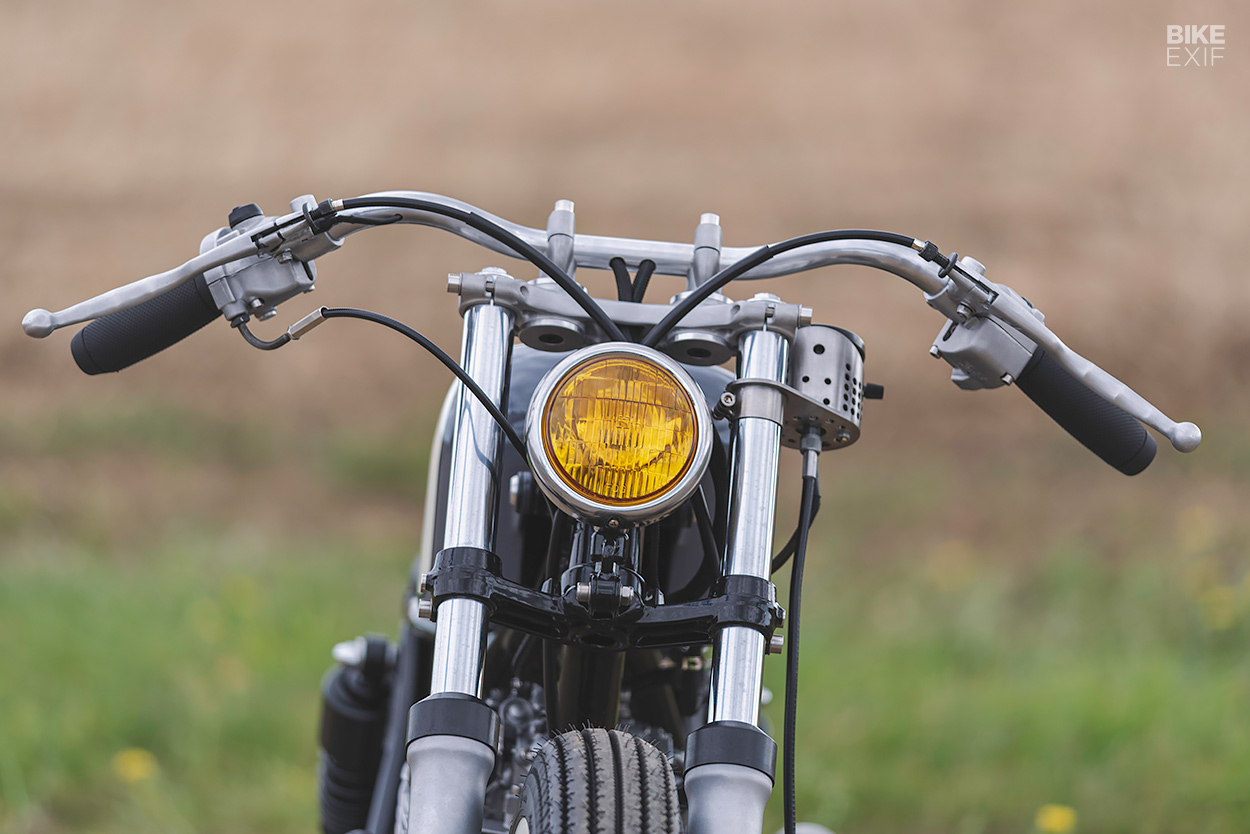 “We jumped at the chance, having seen the quality of Jamie’s previous builds,” says Sam.

“I loved Jamie’s goal for the build: a low, super clean, simple looking bobber, influenced by Japanese builders such as Heiwa. A plan was made, and the target was to have the bike ready and on show at the Bike Shed London 2019.” 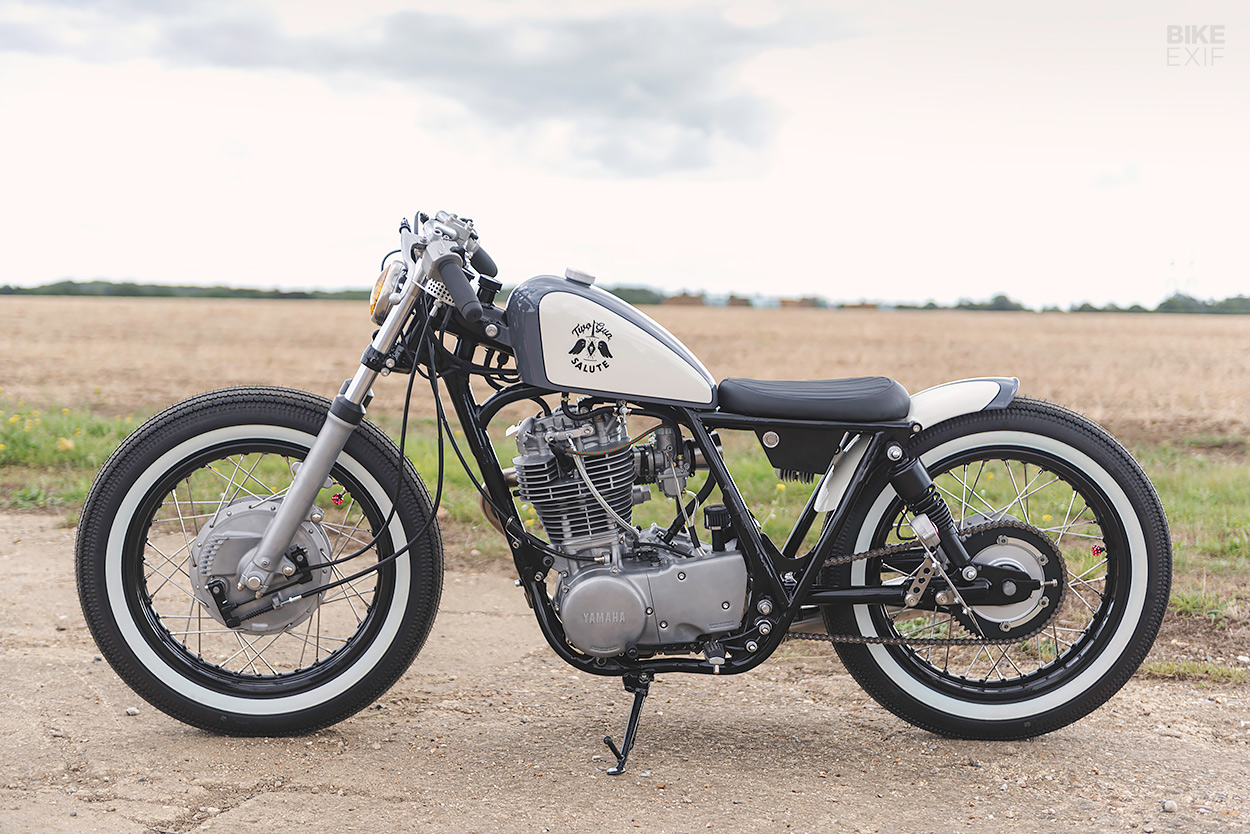 A 1992-model Yamaha SR400 was sourced directly from Japan, and landed in the UK 13 weeks before the show. So Jamie (who also has a family and a nine-to-five) kicked into high gear.

He grabbed his grinder, de-tabbed the frame, and lopped off everything behind the shock mounts. Then he welded in neat pair of rear fender lugs, and built a battery box to sit below the seat. The tail’s finished off with a trimmed Motone fender, with a clever mounting system that can be adjusted to match the wheel’s position when you tweak the chain tension. 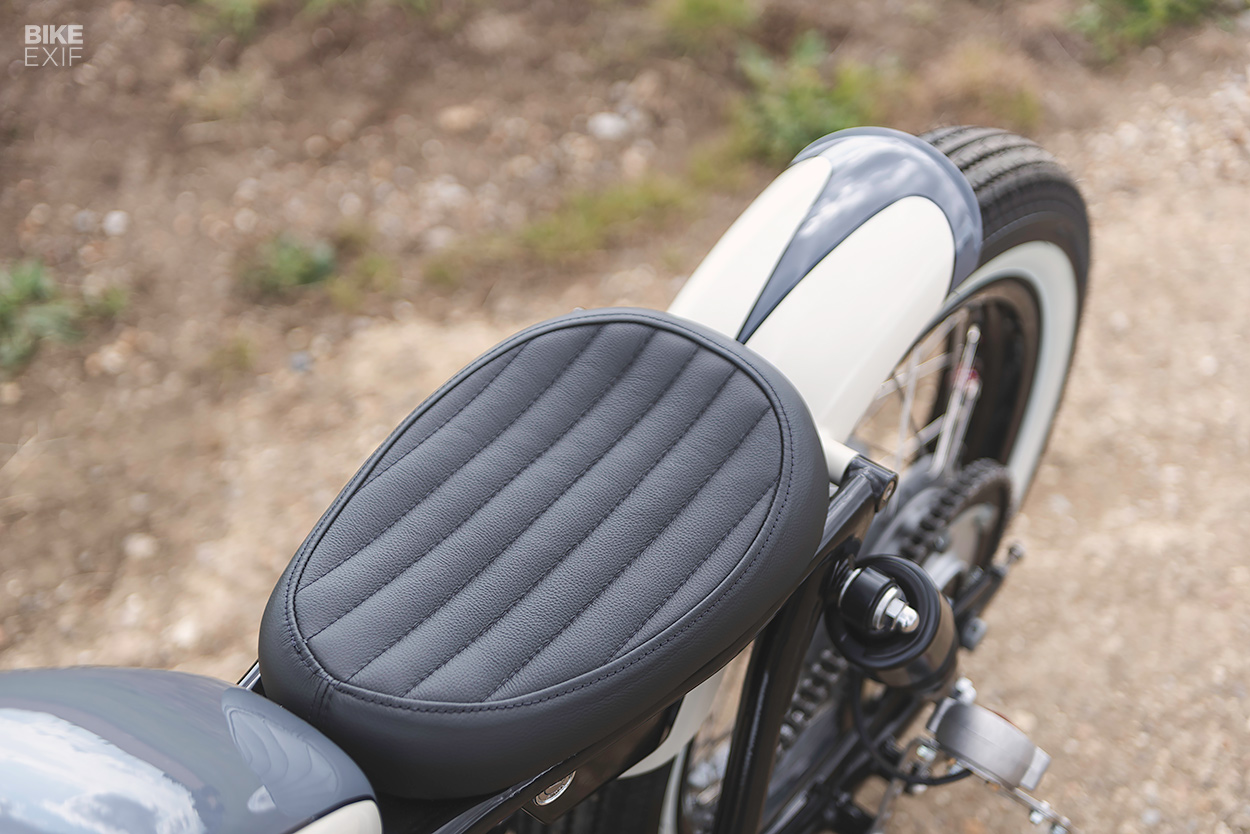 Up top is a neat solo bobber seat, upholstered in black leather with a classic tuck and roll pattern, by Nostalgia Upholstery. There’s a Motone taillight further down, attached to a custom-built plate bracket that’s mounted to the swing arm.

Jamie tweaked the SR400’s stance too, by swapping out the rear shocks for a set of Harley-Davidson units that are 100 mm shorter than stock. The front forks were stripped, rebuilt and lowered by 80 mm. 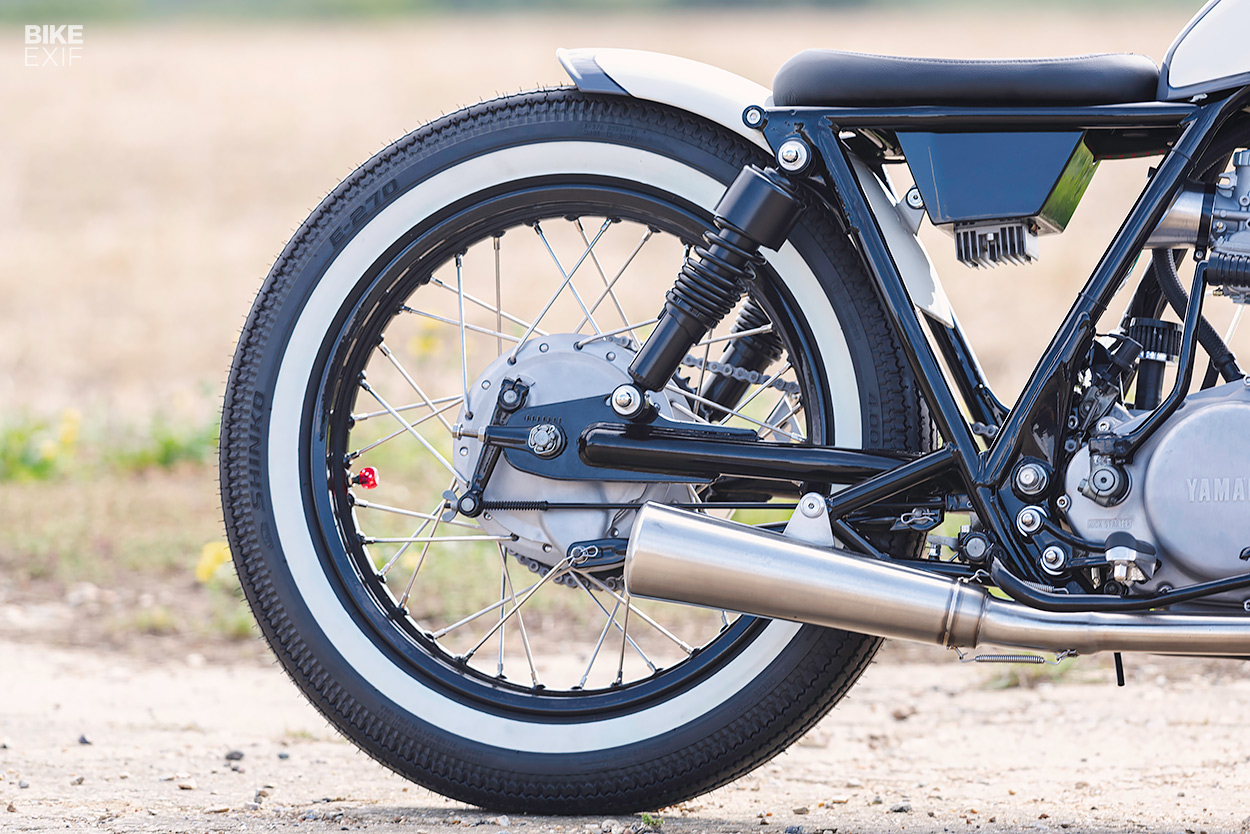 Jamie decided to keep the SR’s stock wheels, but they were stripped, powder-coated and re-laced with stainless steel spokes, with help from SFX Wheels. Two Gun Salute’s aesthetic is very much steeped in hot rod culture, so they threw on a set of whitewalls from Shinko.

The Yamaha’s new fuel tank was lifted from a Harley Sportster, but it was far from a straight swap. It needed a new tunnel, and had to be reworked to clear the SR’s oil-in-frame filler. It’s topped off with its own one-off gas cap. 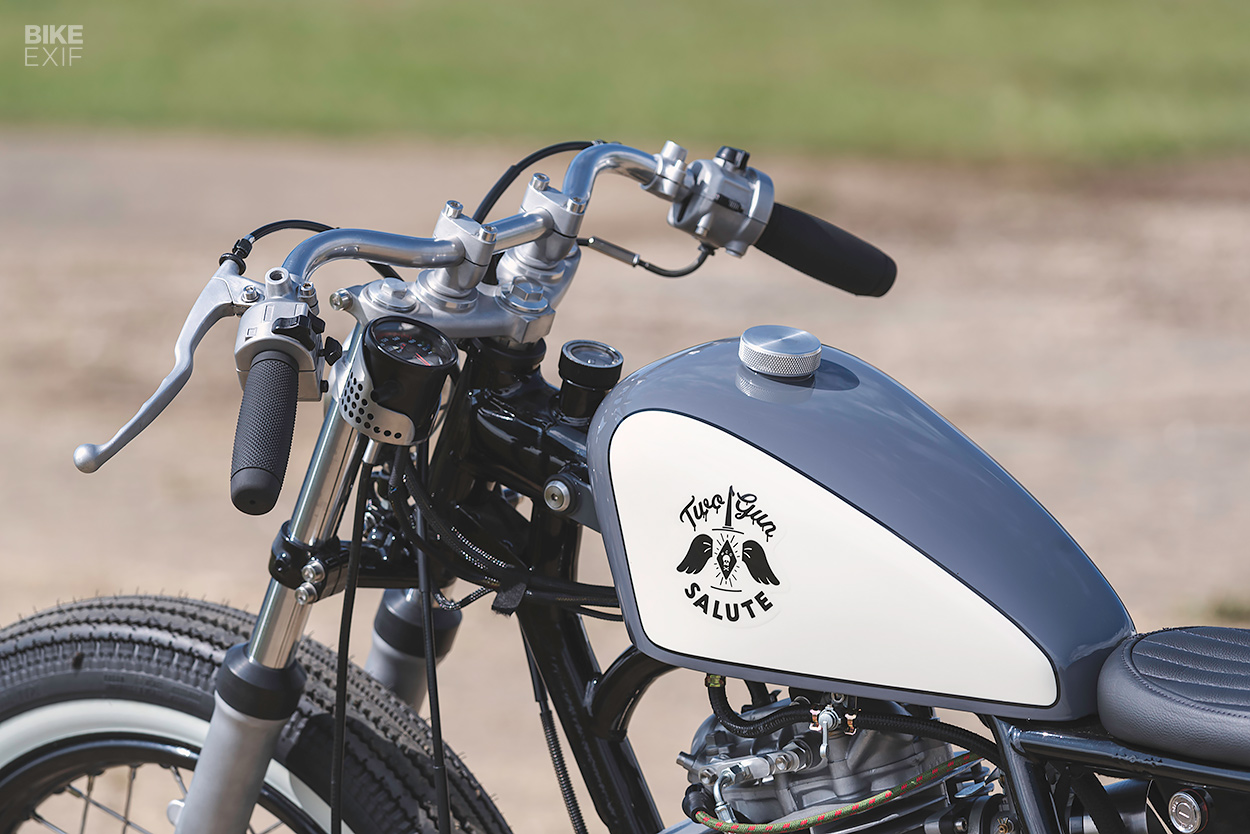 Just in front of the tank, Jamie machined the ignition and speedo mounts off the top yoke, and ditched the rubber riser mounts for solid mounts. The ignition now lives on the side of the battery box, and there’s a generic aftermarket speedo tucked into a hand-made basket on the side of the forks.

The bars are from Norman Hyde, and the grips are from Biltwell Inc. The standard switches were kept and cleaned up, and all the wiring rerouted to run through the bars. The new headlight is classic bobber fare, right down to the yellow glass. 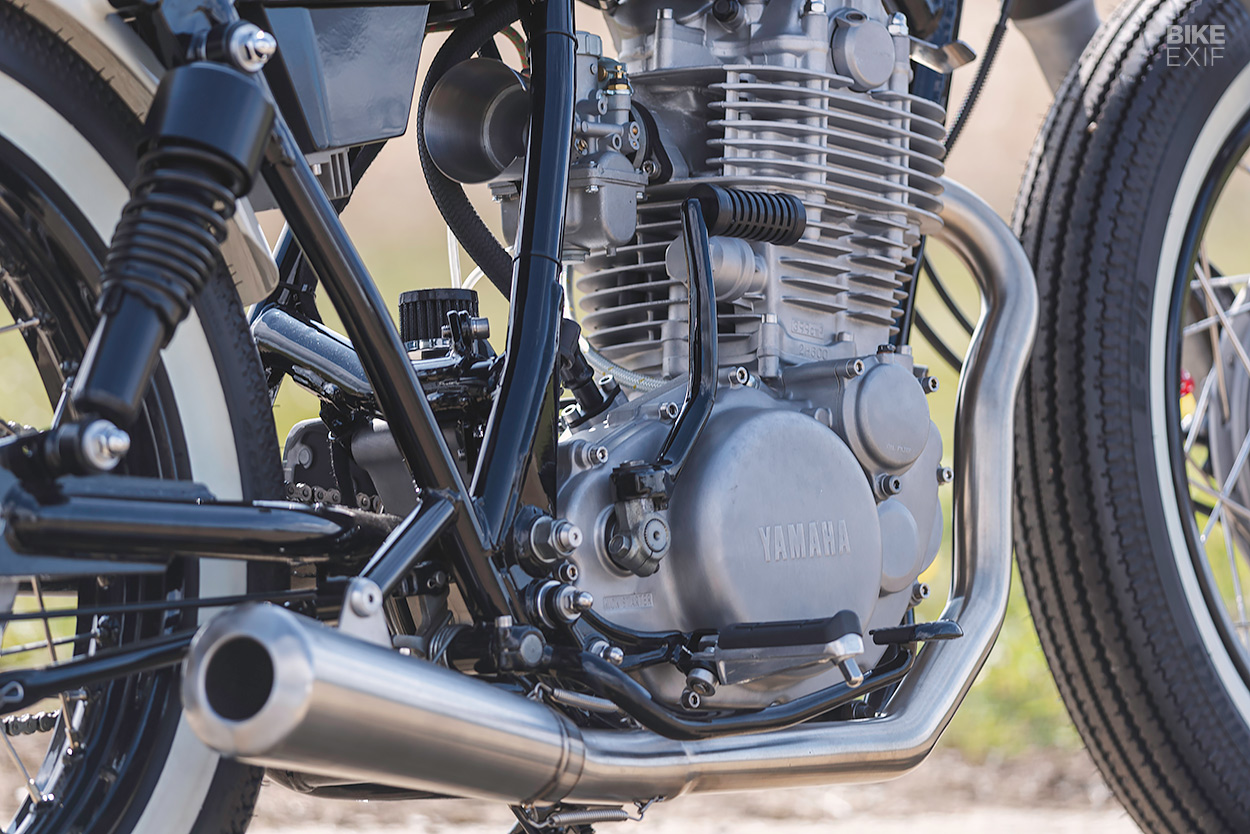 Jamie didn’t need to do too much to the motor, so it simply went off to Motoedit for vapor blasting. It also got a new Mikuni VM34 carb with a custom stainless steel velocity stack, and a braided camshaft oil line.

The exhaust was welded up from a collection of pre-bent sections, then capped off with a slightly modified Danmoto silencer. All the welds were smoothed off, and the entire system was given a brushed finish. 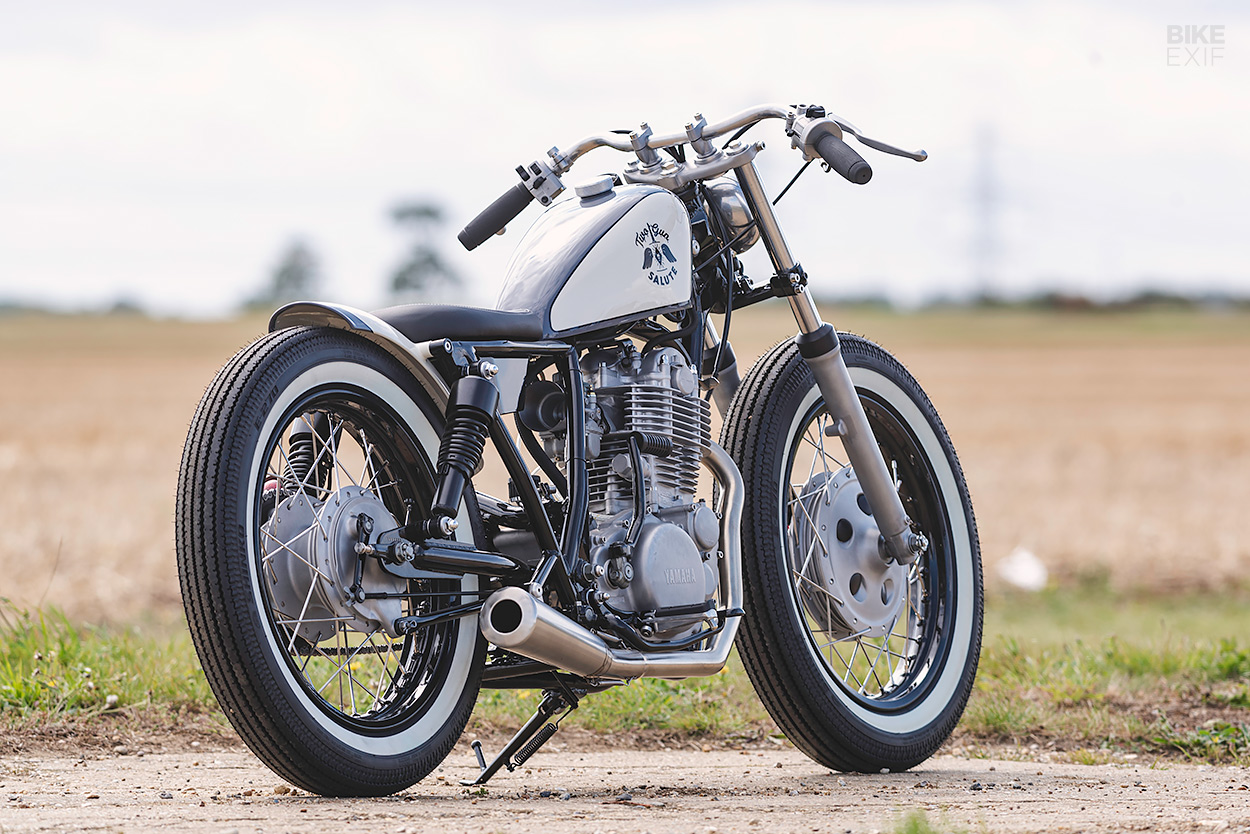 There’s not a hair out of place here, and we love the cheeky little details like the cloth spark plug cable and dice valve caps. It’s a killer build, and one of the best examples of a Jap-style bobber that we’ve seen. 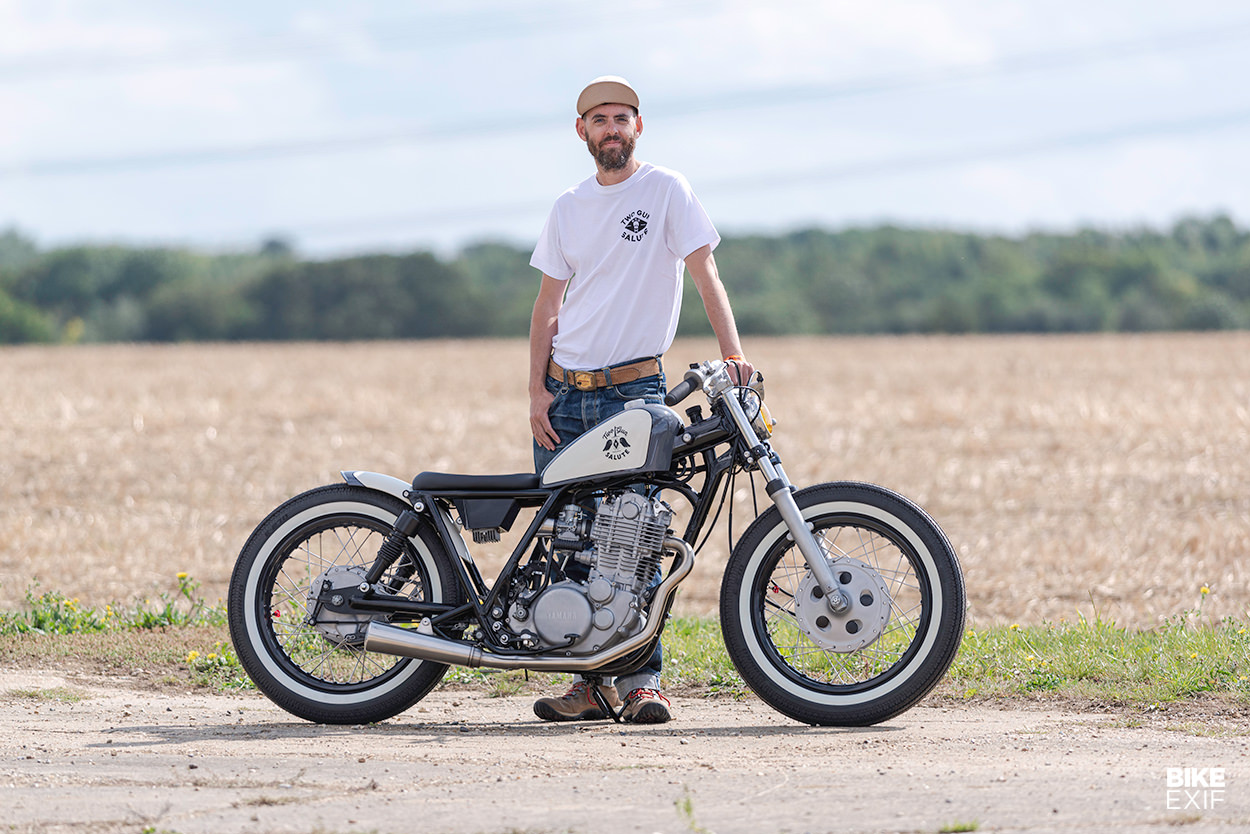