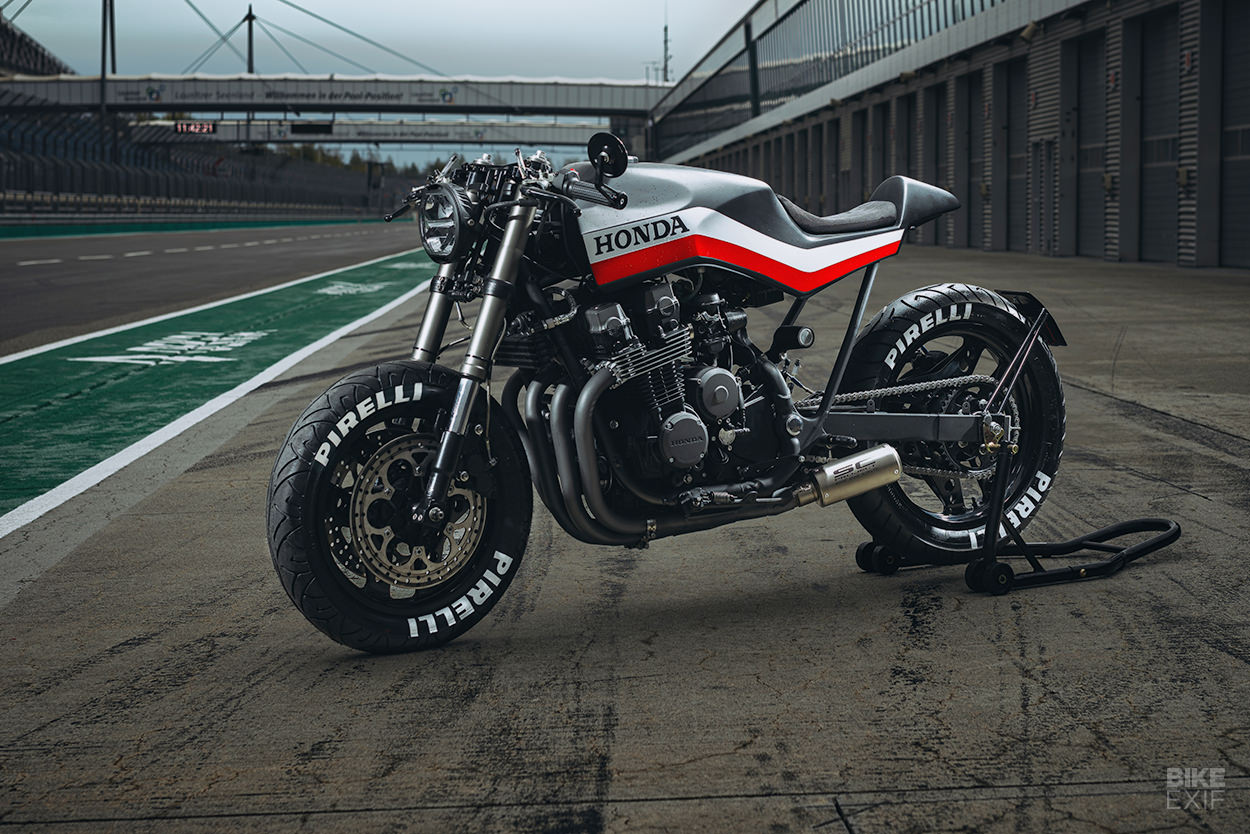 The annals of motorcycling history are filled with ‘tweeners’—motorcycles that improved upon outgoing models, but eventually fizzled out to make way for the next generation. Just like the Honda CBX 750 F.

The CBX 750 F was an update on the beloved (and indeed iconic) CB750, but it wasn’t nearly as popular, and wasn’t really sold in the US either. It was pretty cool in its own way though, with a ‘modern’ DOHC 16-valve motor and radical sport touring styling that, like most things from the 80s, hasn’t dated well. 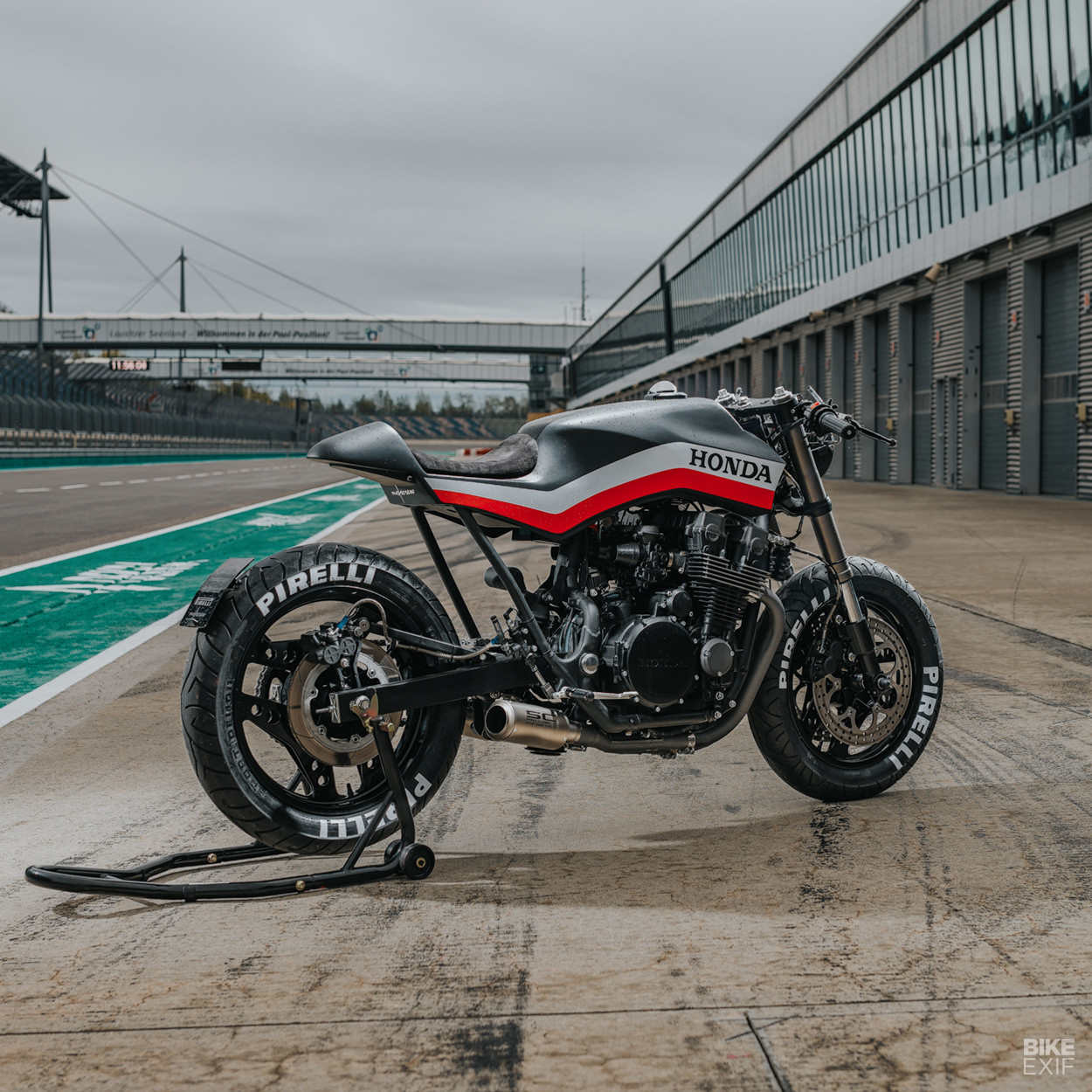 There aren’t many CBX 750 customs out there, and more’s the pity. There’s a lot of potential in this 80s-era machine—and Chris Scholtka’s just shown us how to unleash it with this wild 1984-spec model.

Chris lives in a town called Cottbus, 68 miles southeast of Berlin. He’s a firefighter, but spends his down time customizing bikes as ‘Motocrew’ out of his garage at home. And with the exception of paint, he does everything himself. 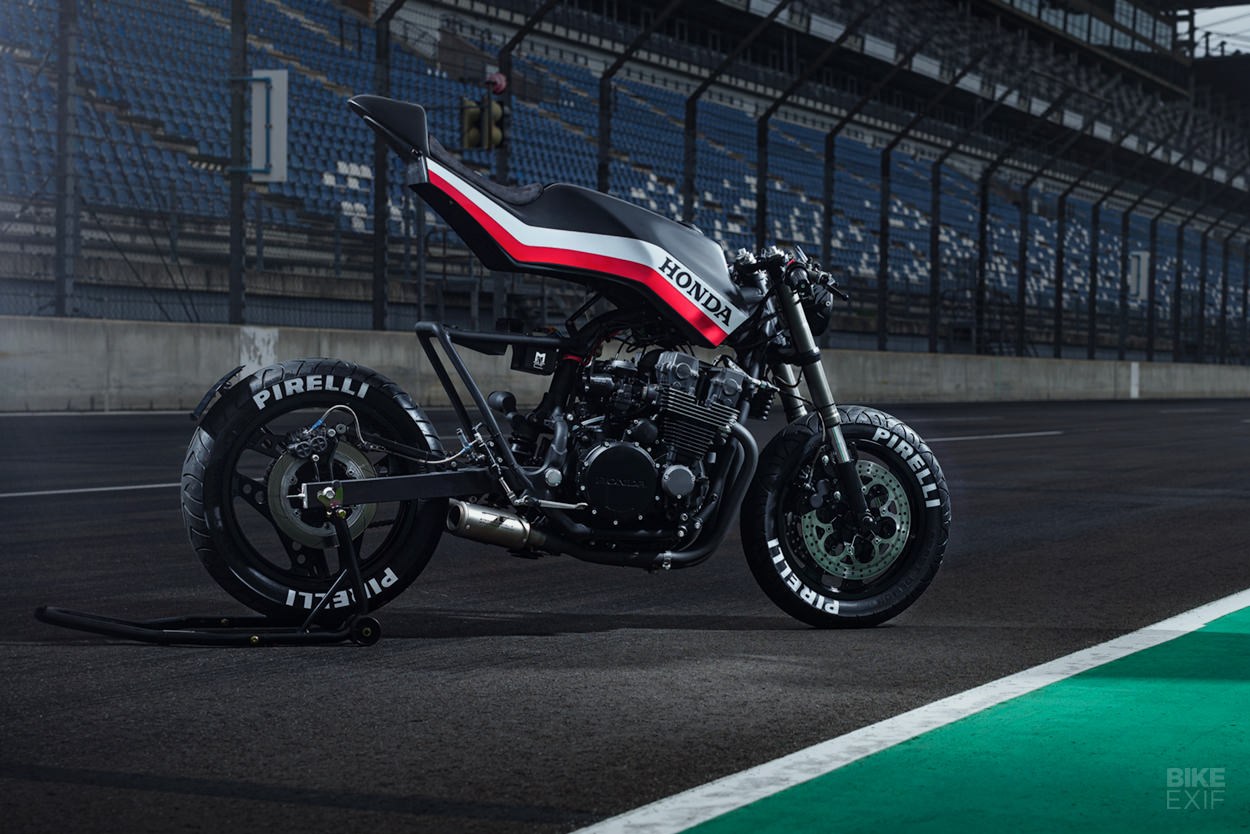 “The aim was to get a modern interpretation of the original 1984 race style of the CBX 750,” Chris tells us. His concept was to match key elements of the CBX—like the weird 16F/18R wheels—with modern performance upgrades.

To achieve this, he upgraded the suspension with the forks and rear shock from a 2009 Yamaha R1. Getting the forks to fit up top wasn’t too hard—but getting them to play nice with the Honda’s 16” front wheel took some doing. 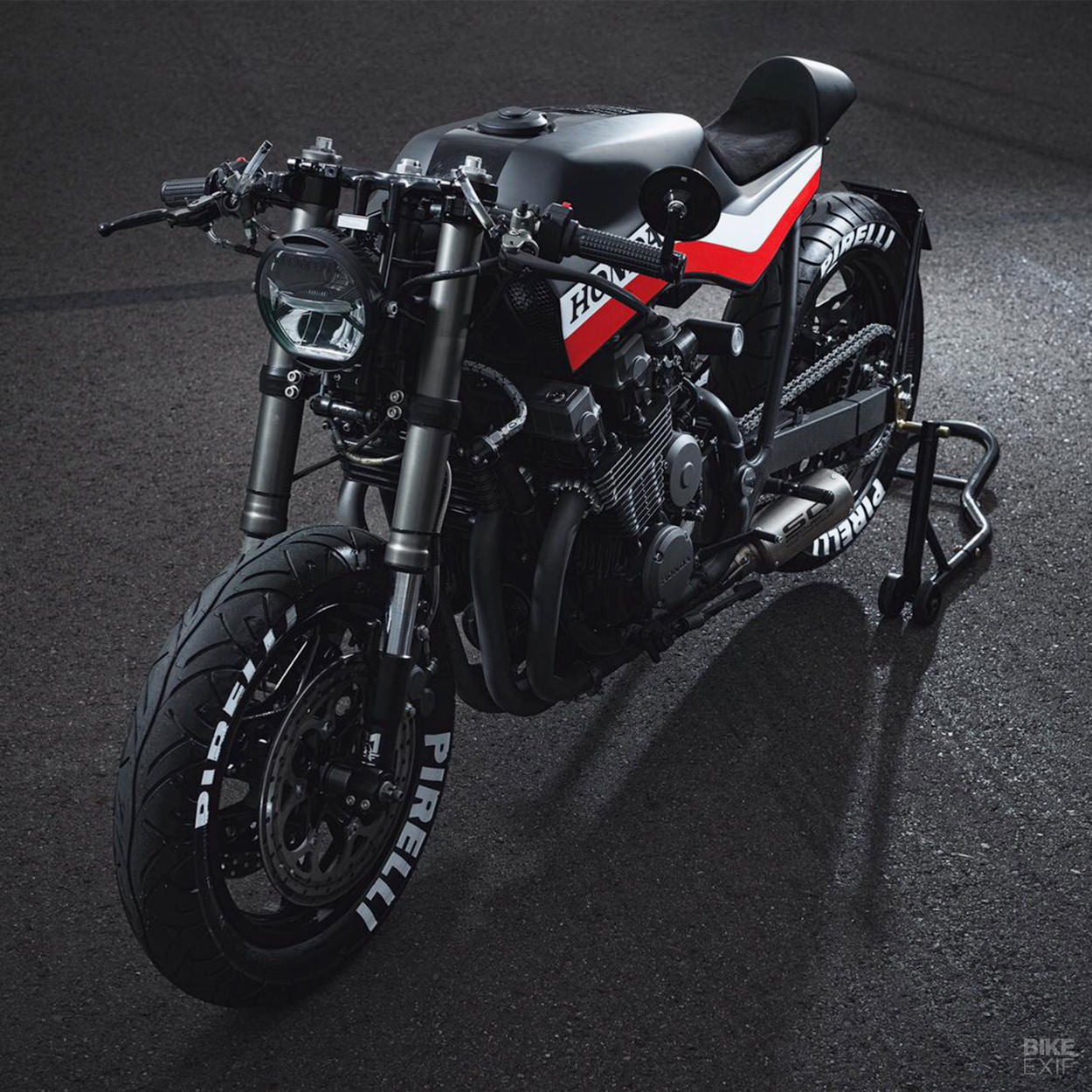 Chris had to machine the wheel to take a bigger axle, then focused on setting up the brakes.

He kept the R1’s twin brake calipers, matching them with 320 mm discs so that he could use the original R1 brake mounting points. Then he installed Brembo master cylinders and upgraded brake hoses. 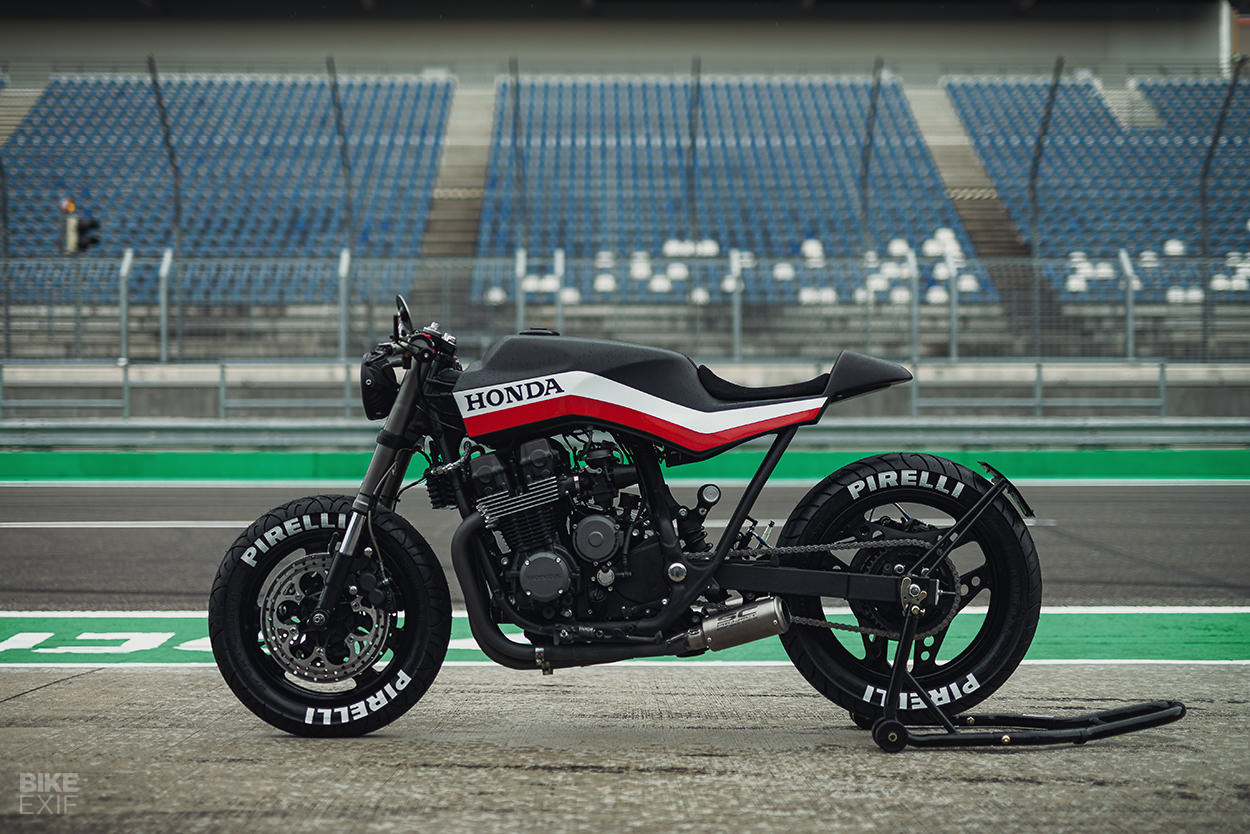 The CBX 750’s sharp new bodywork was another big undertaking. Chris started with the stock fuel tank, then grafted on a tail section of his own design to form a monocoque unit. (He even took a metal-shaping course to help him nail it.)

The body sits on a modified subframe, and hinges up as one unit to provide access to the electronics and motor. 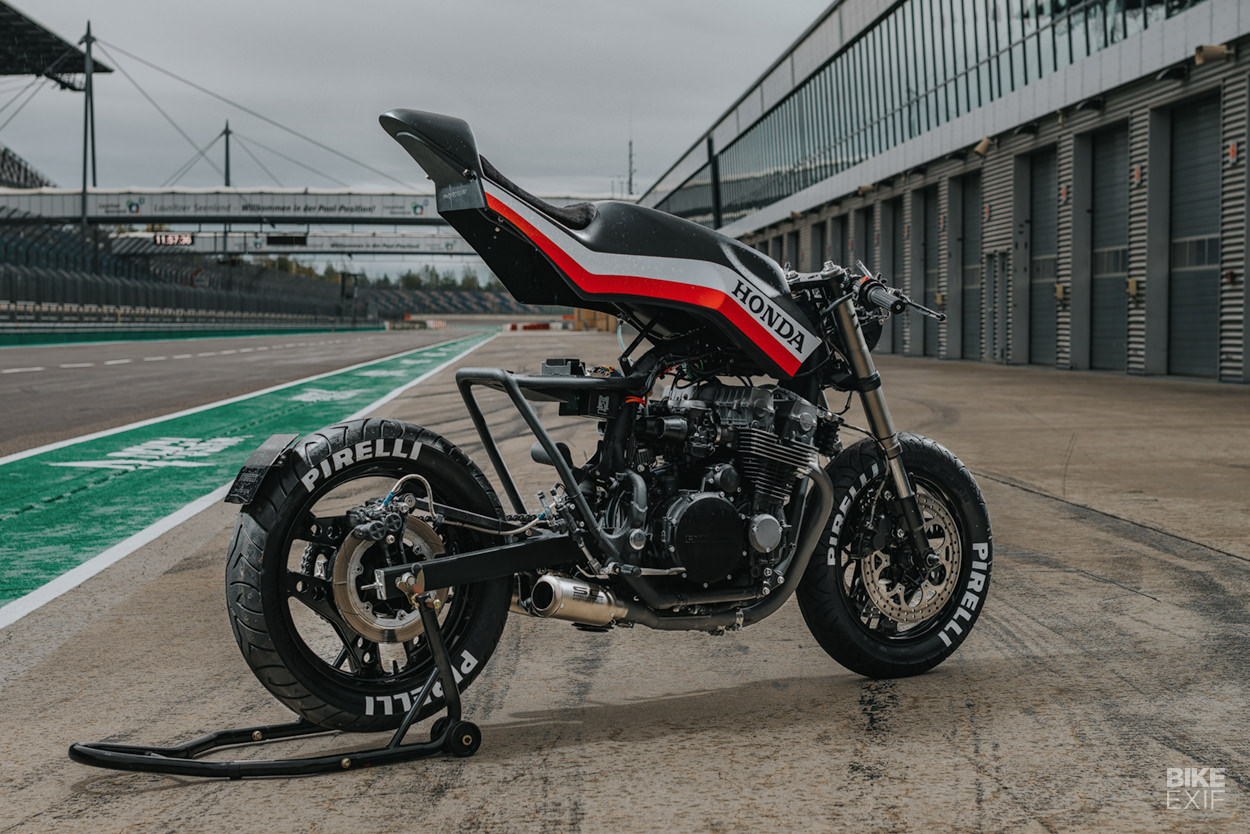 Chris built the lift system himself, complete with a gas cylinder and a custom hinge. When it’s down, it’s held in place by a latch adapted from a racecar hood, with the locking mechanism stashed under the rear of the frame.

“The inspiration was definitely the ‘Whale’ BMW R100R by Vagabund,” Chris tells us. “I love their builds and their style. I talked to the owner to see if it was OK to copy the monocoque style—he gave me the OK and was exited to see what I did with the project.” 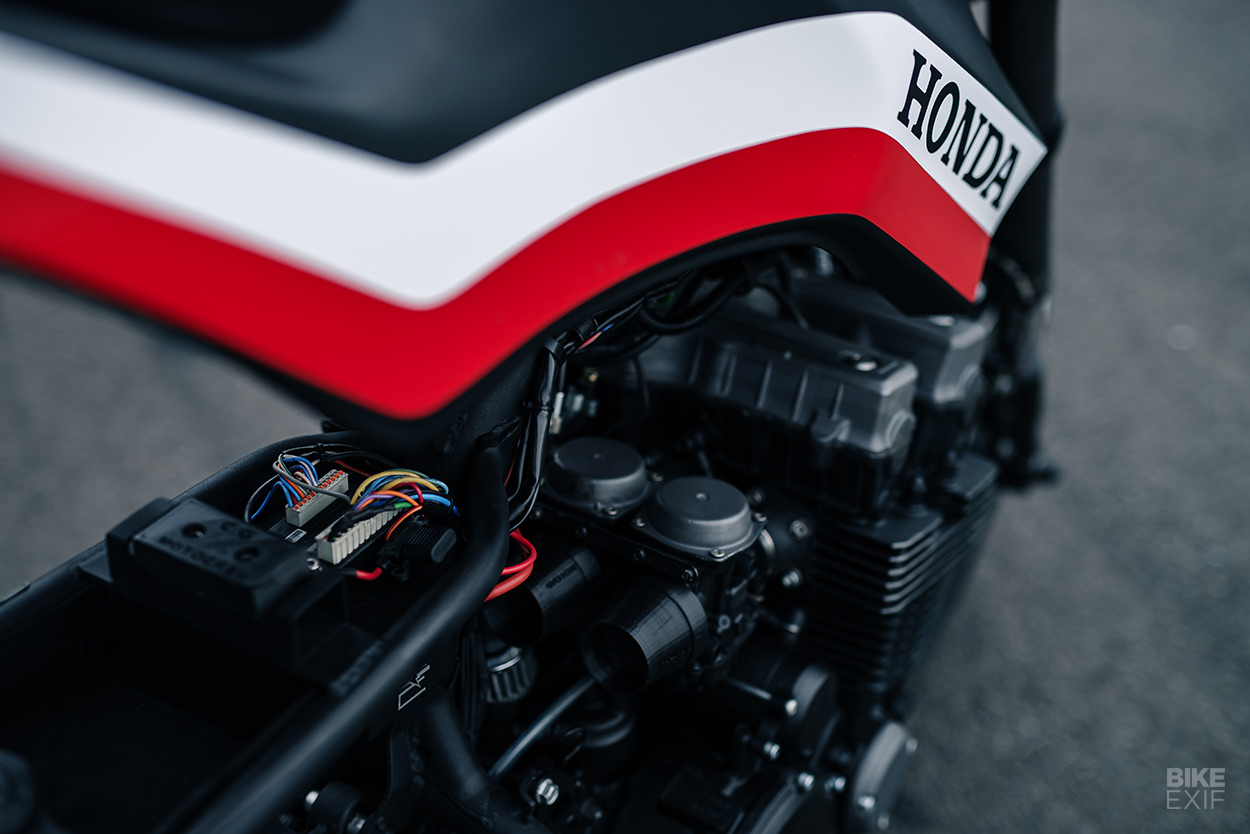 “Another big inspiration is Hookie Co. They are based just 100 km from my home, and I visit the guys sometimes to get some spirit.”

Tucked away under the body is a fresh wiring system, based around a Motogadget Bluetooth-capable m.unit blue, complete with a keyless ignition. Up front, Chris installed Motogadget grips, a single bar end mirror and a tiny digital speedo. 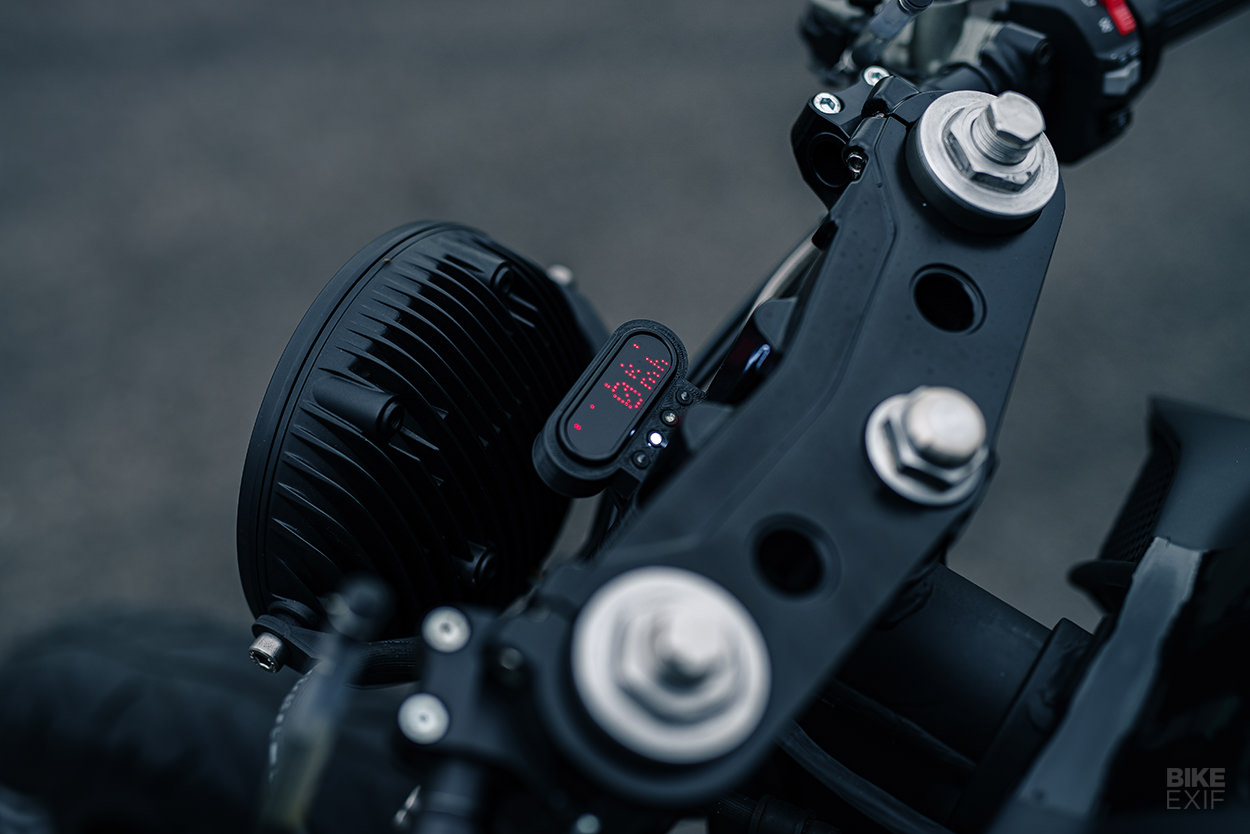 The speedo and LED headlight are held in place by brackets that Chris designed and 3D printed himself. He 3D printed a set of custom intakes for the carbs, too, then modified the stock exhaust headers to take a pair of SC Project mufflers.

There are mini Kellermann LED turn signals at both ends, with the rear items doubling as taillights. And there’s a license plate holder mounted off the swing arm—so this custom is fully street legal as well. 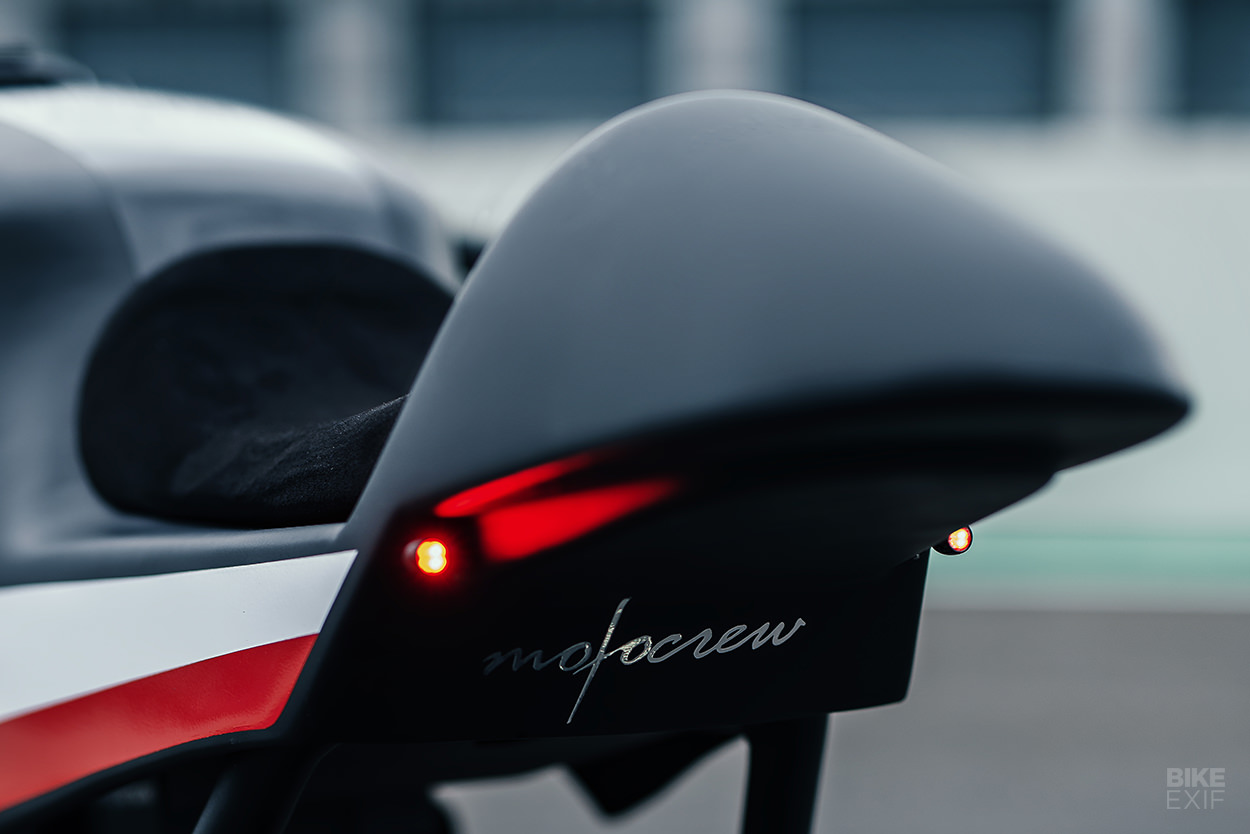 Finished off with bold graphics (and painted logos on the tires), the Motocrew CBX 750 is a fresh take on the otherwise unloved inline four. And with the perfect stance, racy lines and modern upgrades, there’s a lot to love. 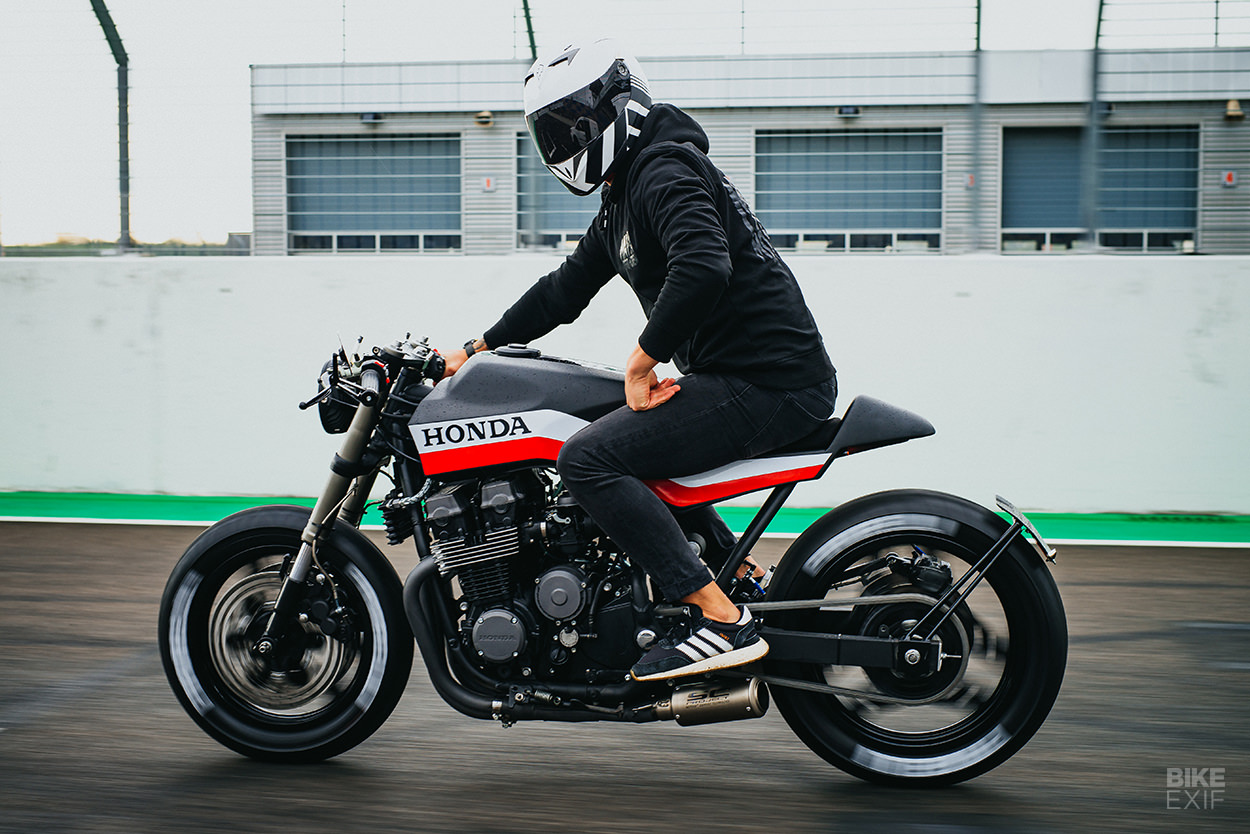 When building a new project, inspiration can come from many places. For Wayne Buys of Fabman Creations in South Africa, his main form of inspiration came from the aesthetically pleasing RSD’s KTM 450 Desert Sled from a few years ago. That RSD KTM was built to celebrate the movie On Any Sunday, The Next Chapter. […]

Revealed: The Top 10 Custom Motorcycles of 2019

It’s always the hardest article to write, but also the most fascinating to research. Our annual roundup of the most popular customs on Bike EXIF reveals the dominant trends in the scene as well as the builders who have their fingers on the pulse. This year, outside of the top two builds, the competition was […]