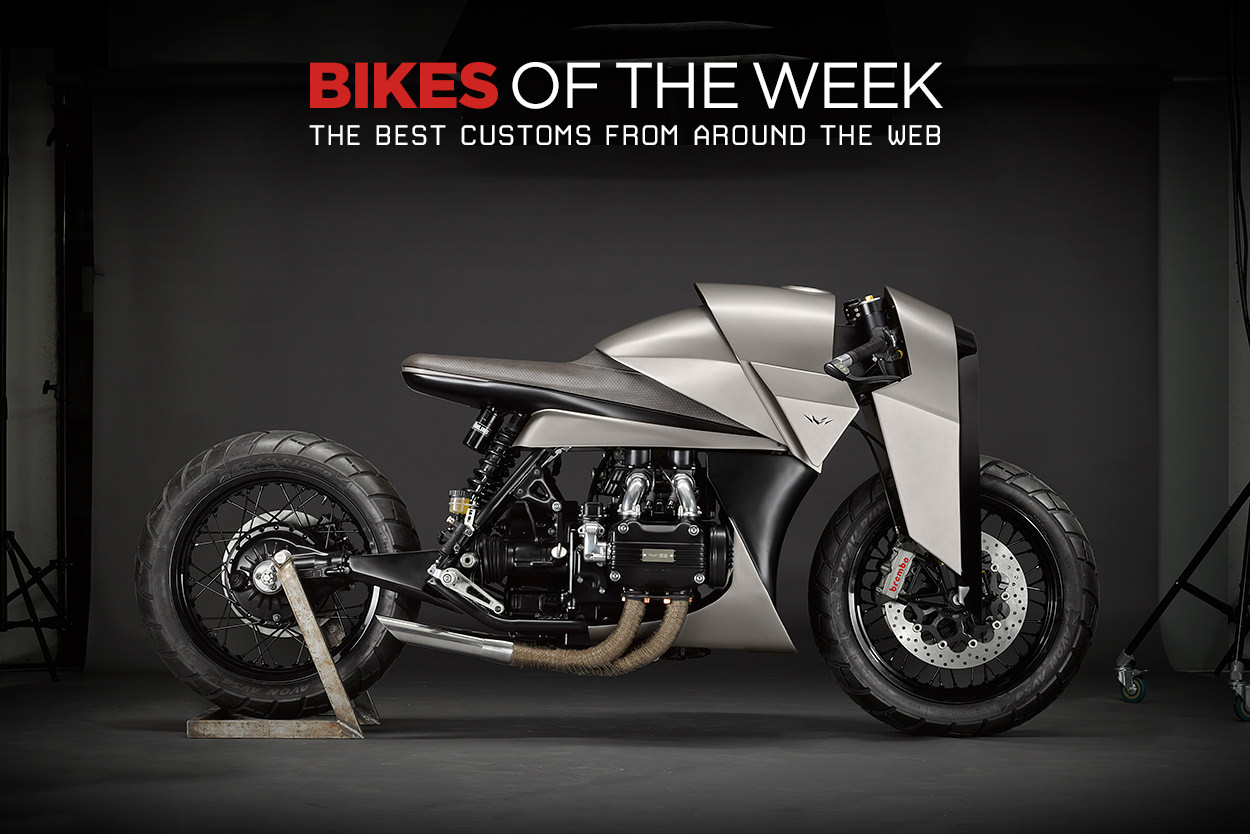 The wildest custom Goldwing you’ve ever seen, an incredibly rare Egli-framed Suzuki GT750, a BMW with Nissan Leaf power, and a seriously weird official body kit for the Honda Monkey. 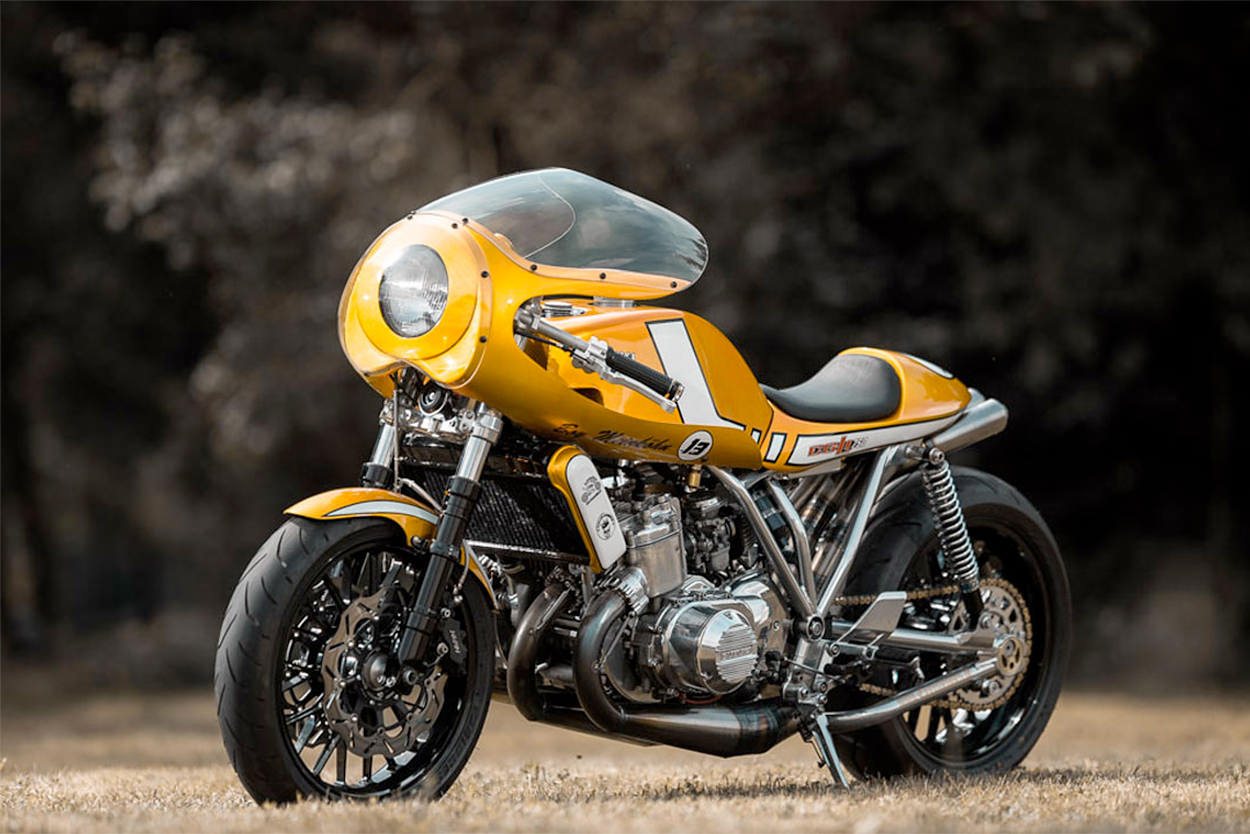 Egli Suzuki GT750 by Extremebikes We love a good detective story, especially if it has a happy ending—like the one involving this Suzuki ‘Water Buffalo.’ The GT750 was known for its scintillating performance, as you’d expect from a two-stroke of this size, but its handling was well off the mark.

This incredibly rare Egli-framed version belongs to racer Boy Meinkehn, and elevates the GT750’s road and track dynamics to a level worthy of its famous engine. 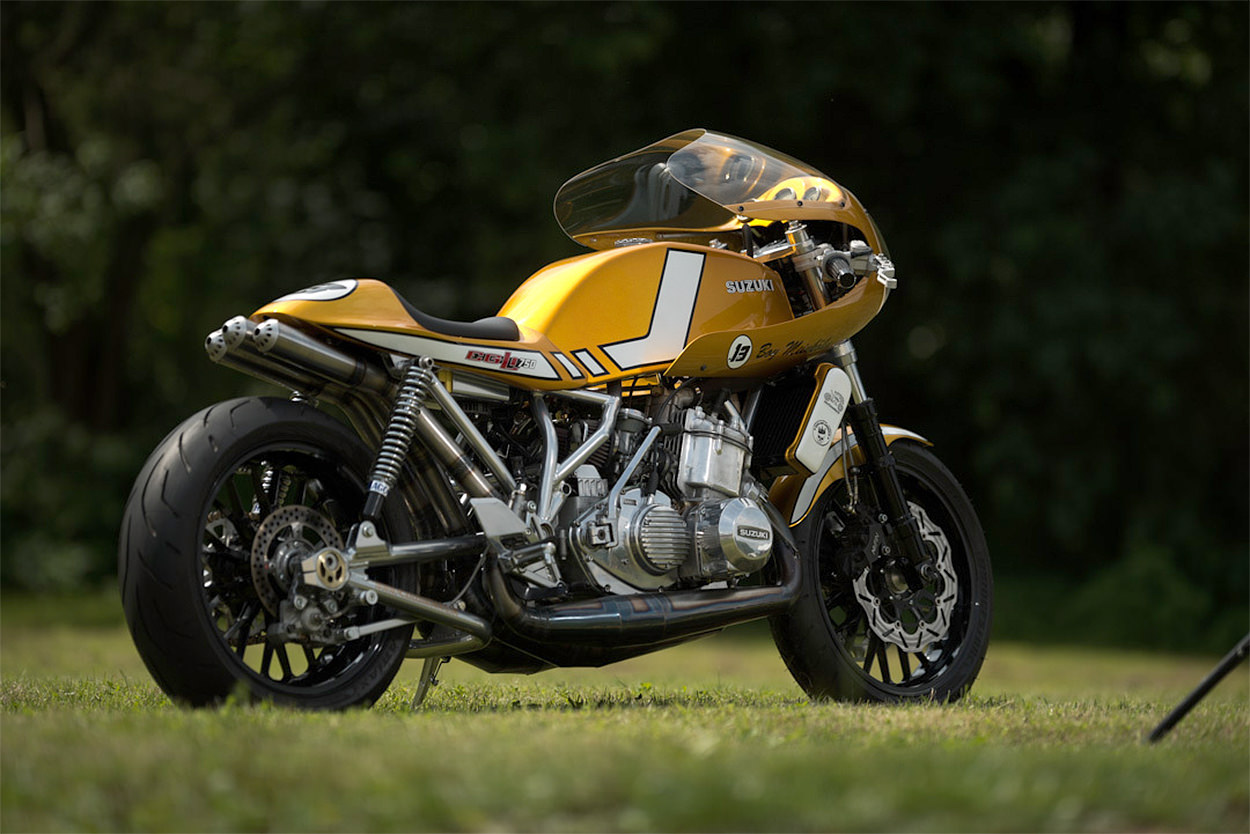 Acting on a tip-off from a friend, Meinkehn acquired what he thought was simply a custom-framed GT750—and then noticed design details and build quirks that suggested it was the work of the legendary Fritz Egli. 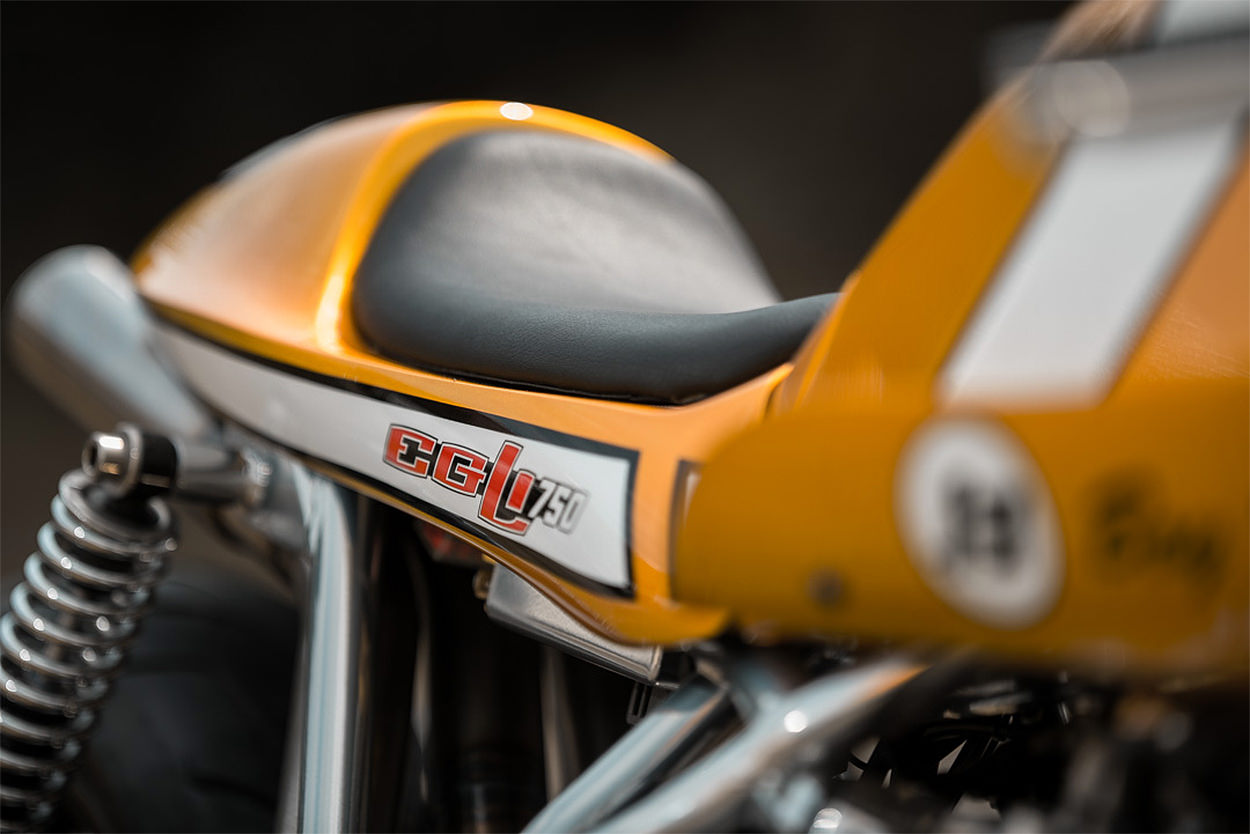 Egli himself confirmed that the bike used one of three experimental GT750 frames that he’d built. So Meinkehn sent the GT750 to Extremebikes, a Freiberg shop known for its high performance builds. The GT750 now has uprated suspension, new bodywork and a finely tuned exhaust system. Return Of The Café Racers has the story. 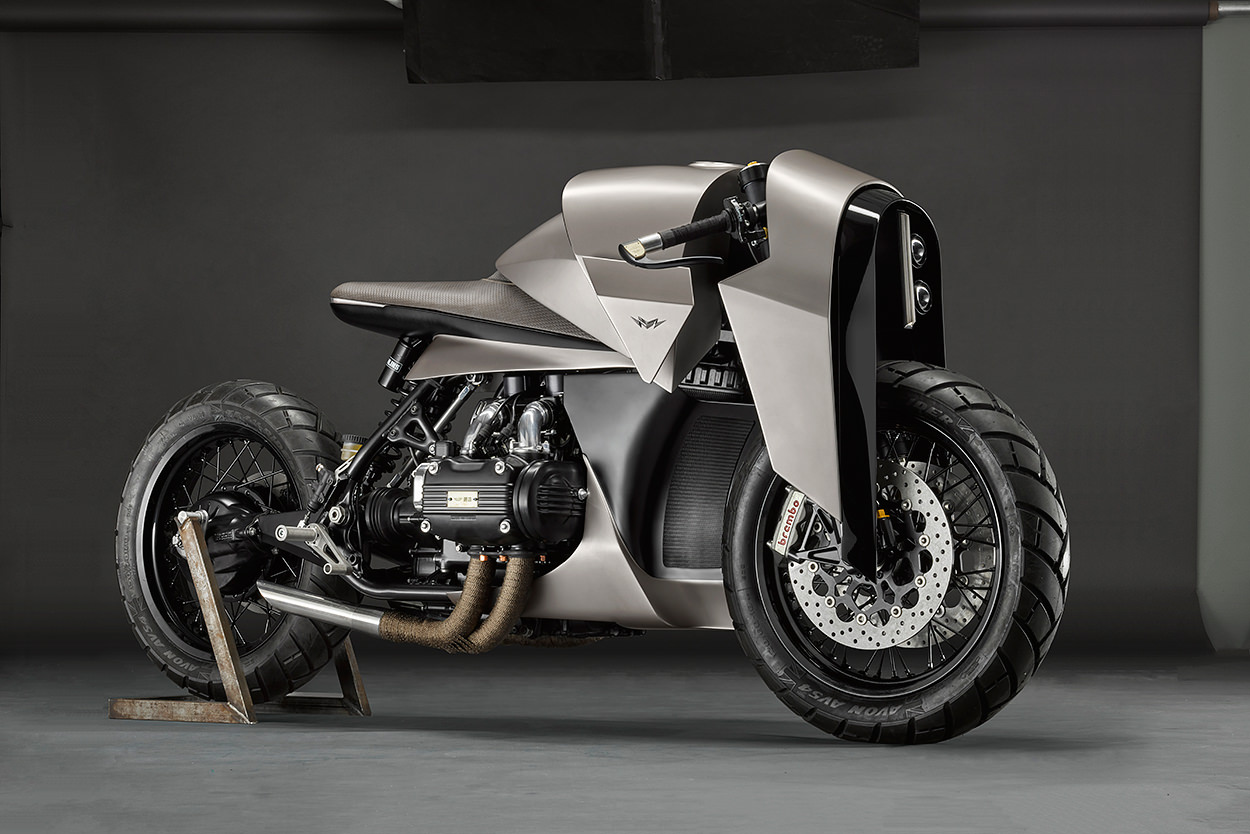 Custom Goldwing by Death Machines Of London It’s a sign of James Hilton’s perfectionism that he’s only just finished this extraordinary 1977 Goldwing after displaying it for the first time at the Bike Shed show last year.

Unhappy with the result at that point, he went back into the workshop and fettled the Honda even more. And it’s been worth the wait, as these amazing Ivo Ivanov shots prove. DMOL has always been about quality over quantity, and ‘Kenzo’ has raised the bar even higher. 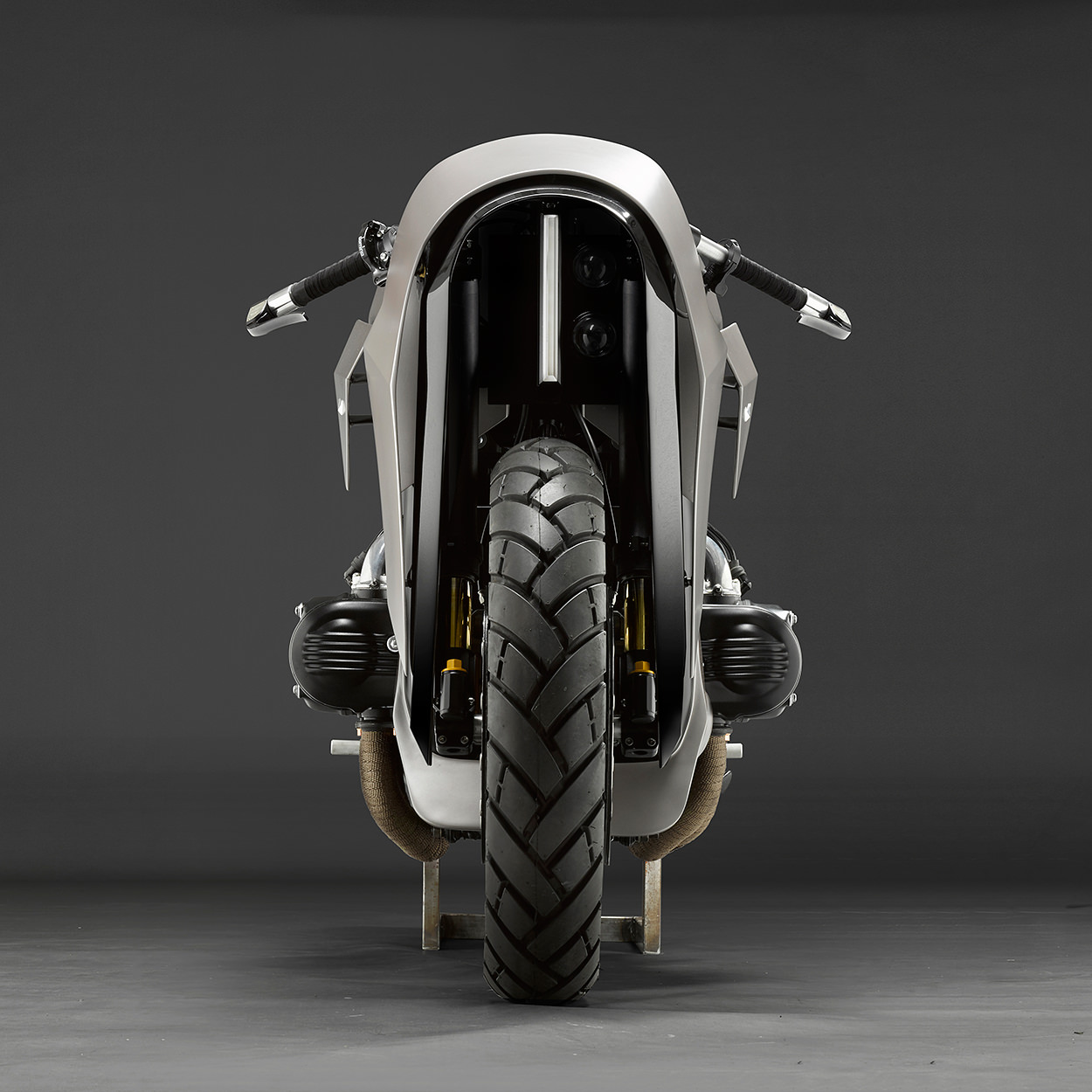 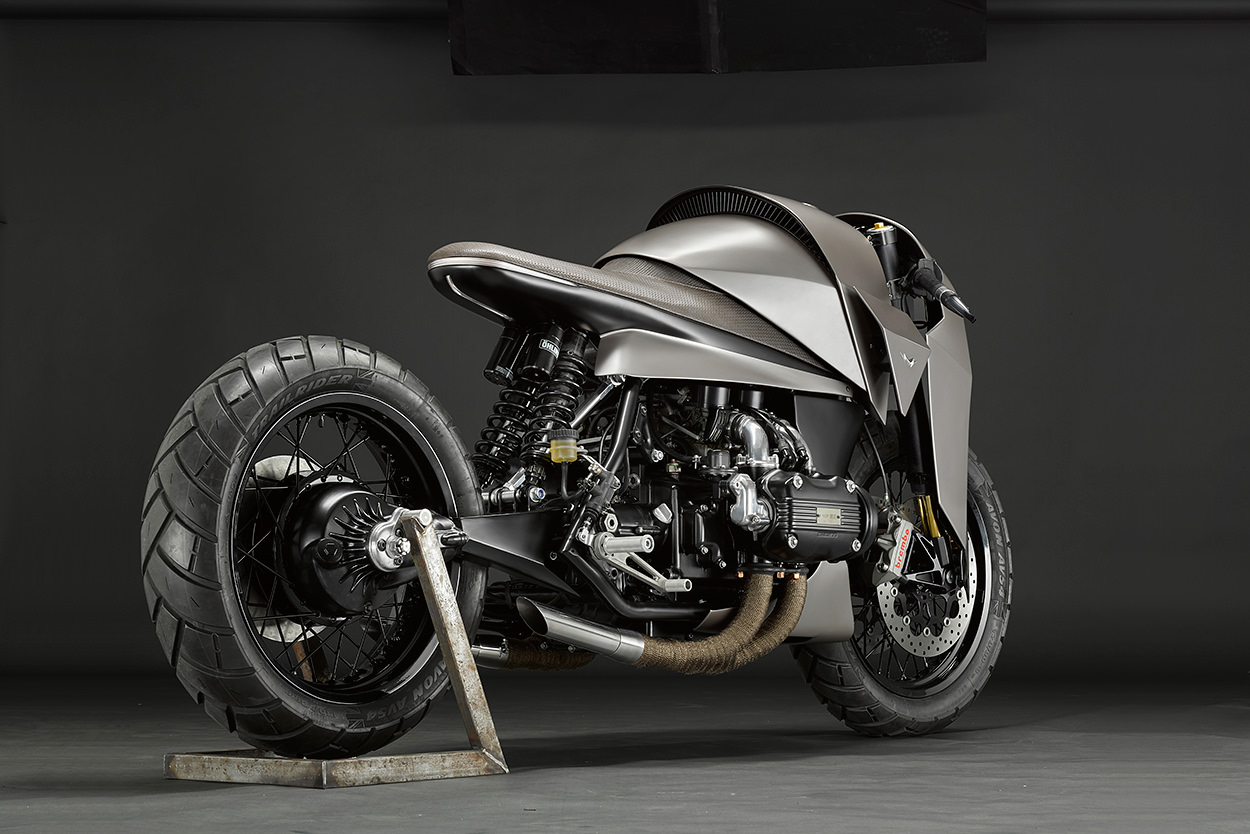 The mighty engine has been returned to as-new condition by Ray Petty Meccanica, the suspension is custom Öhlins all round, and there are insane tiny details such as holographic film on the LED light lenses to create a futuristic plasma glow. Truly next-level stuff. [More] 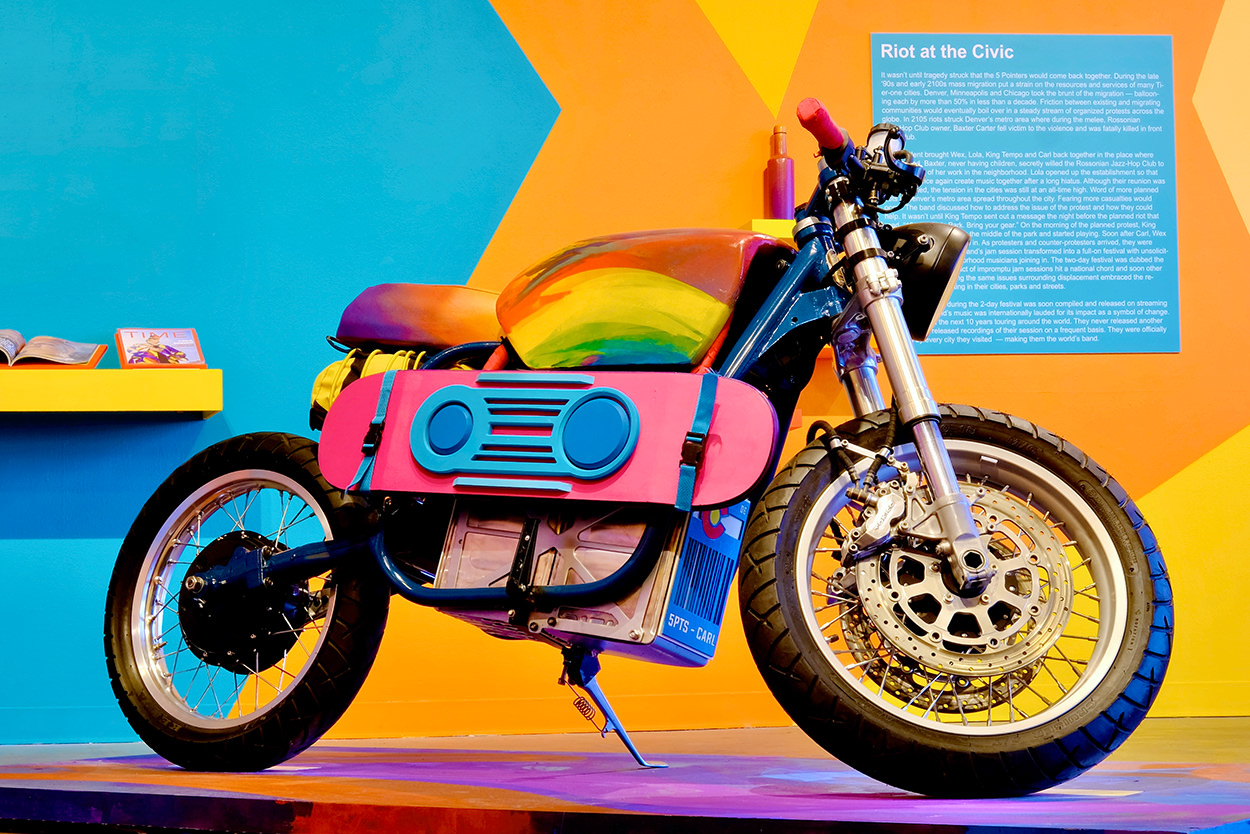 Electric BMW R75/5 by Night Shift Bikes Customizing motorcycles is a serious business, so it’s good to see a lighthearted approach now and then. It was the eye-popping paint that first drew us to this R75 from New Orleans–based Matt Candler of Night Shift, but there’s some clever engineering going on here too. 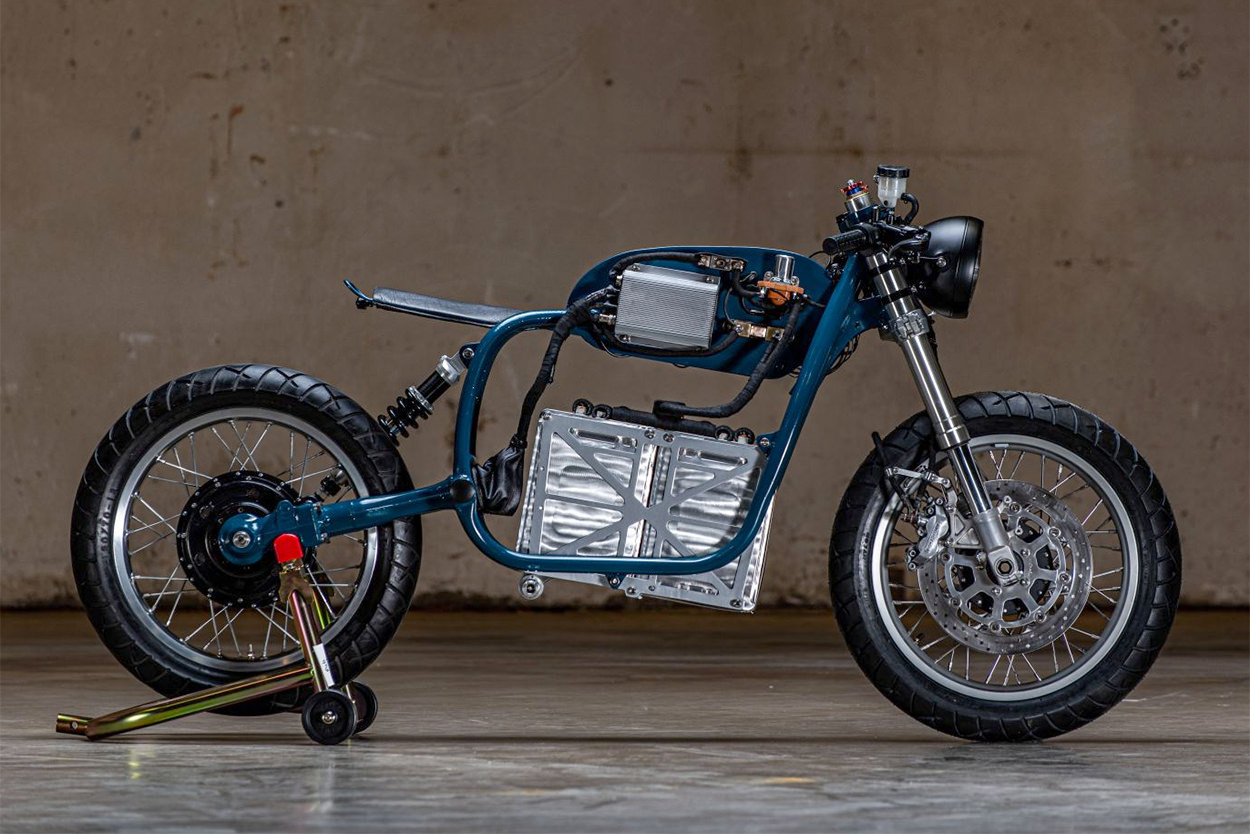 Matt specializes in electric conversions, and for his fifth build, he’s slotted ten cells from a Nissan Leaf powerpack into a 1973 R75 chassis. Laced into the rear 18-inch rim and wrapped around the rear axle is a custom, air-cooled DC motor from Enertrac, putting out 13HP/10kW continuous, with bursts to 26HP/20kW.

Mechanical brakes are gone because the Enertrac can provide regenerative braking and one-wrist control. 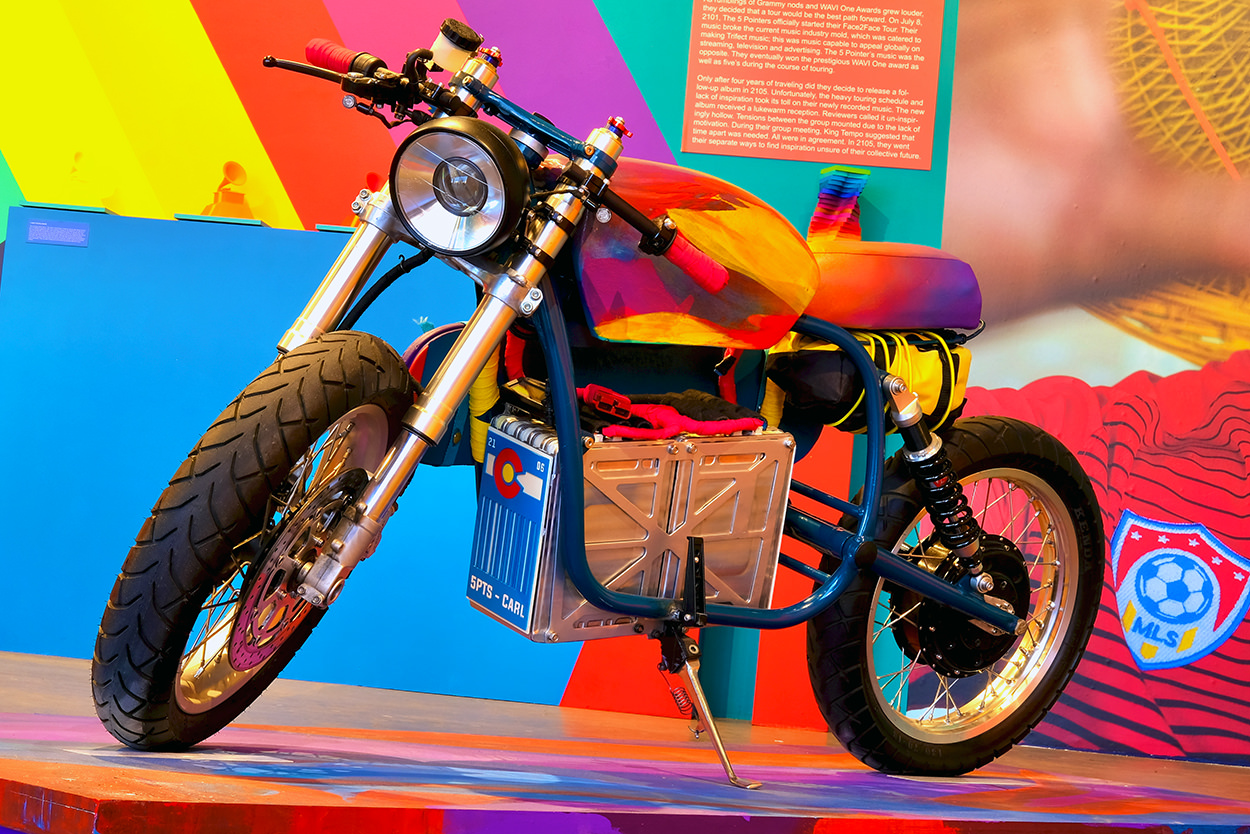 Cognito Moto provided help with the wheels, a stem to receive the front end from a Suzuki GSX750, a custom LED headlamp, and lots of encouragement. If you made it to the Handbuilt Motorcycle Show this year, you’ll have spotted the bike in part-built form — but right now, it’s in Denver, for the Red Bull-sponsored 5 Pointers Show. [Night Shift Bikes] 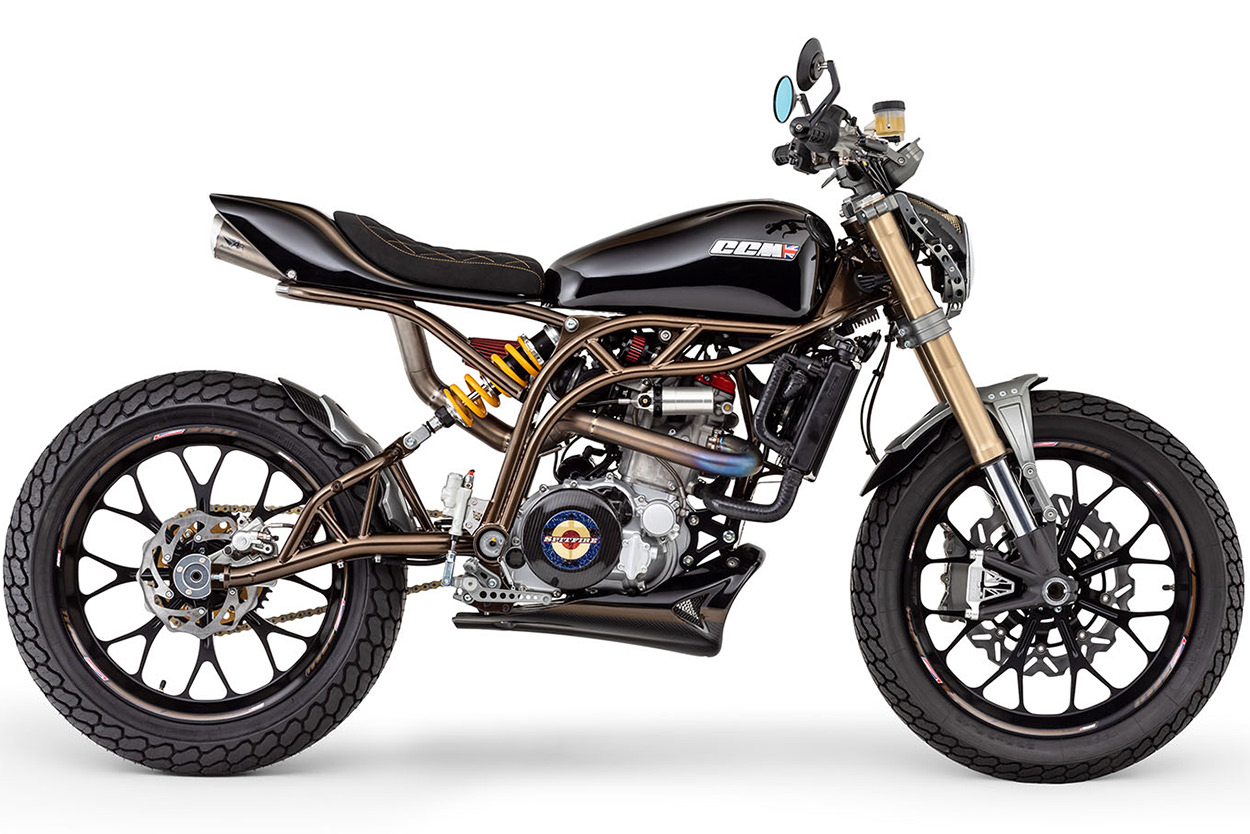 A couple of years ago the Spitfire range was launched, to widespread approval. After using Suzuki engines for years, CCM switched to a Husqvarna 600cc single, slotted into a hand built tubular steel frame. 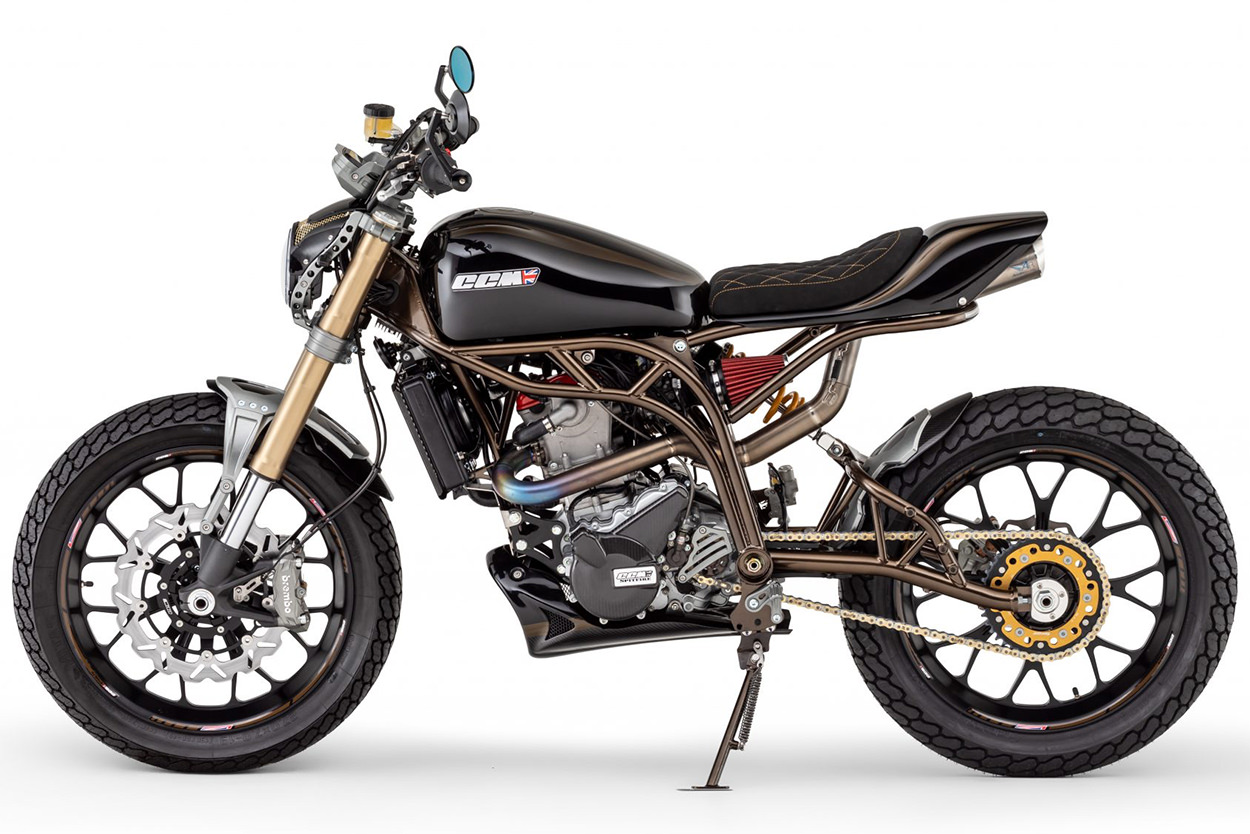 The range has now been updated with new ‘Stealth’ variants, and they’re so enticing we just had to include them here. Our favorite is the ‘Stealth Foggy’ shown in these images, with black paint and bronze highlights, chunky Marzocchi forks, and a frame finished in elegant ‘bronze chrome’ powdercoat. 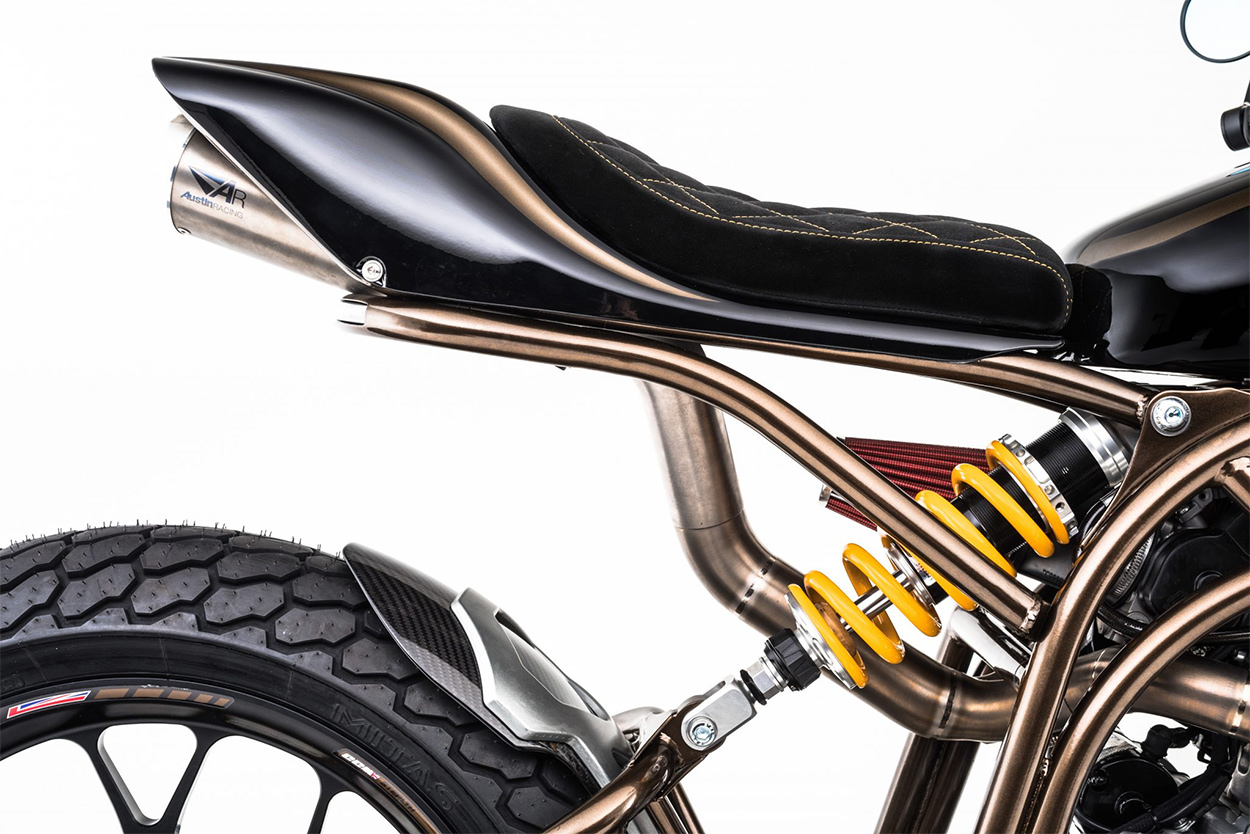 The 19-inch machined wheels are finished in black, with blacked-out hubs too, the four-pot radial twin callipers are from Brembo, and there are touches of ‘titanium grey’ anodizing here and there to provide light relief. The price is £11,995 [US$15,400], which makes this limited edition excellent value. [CCM] 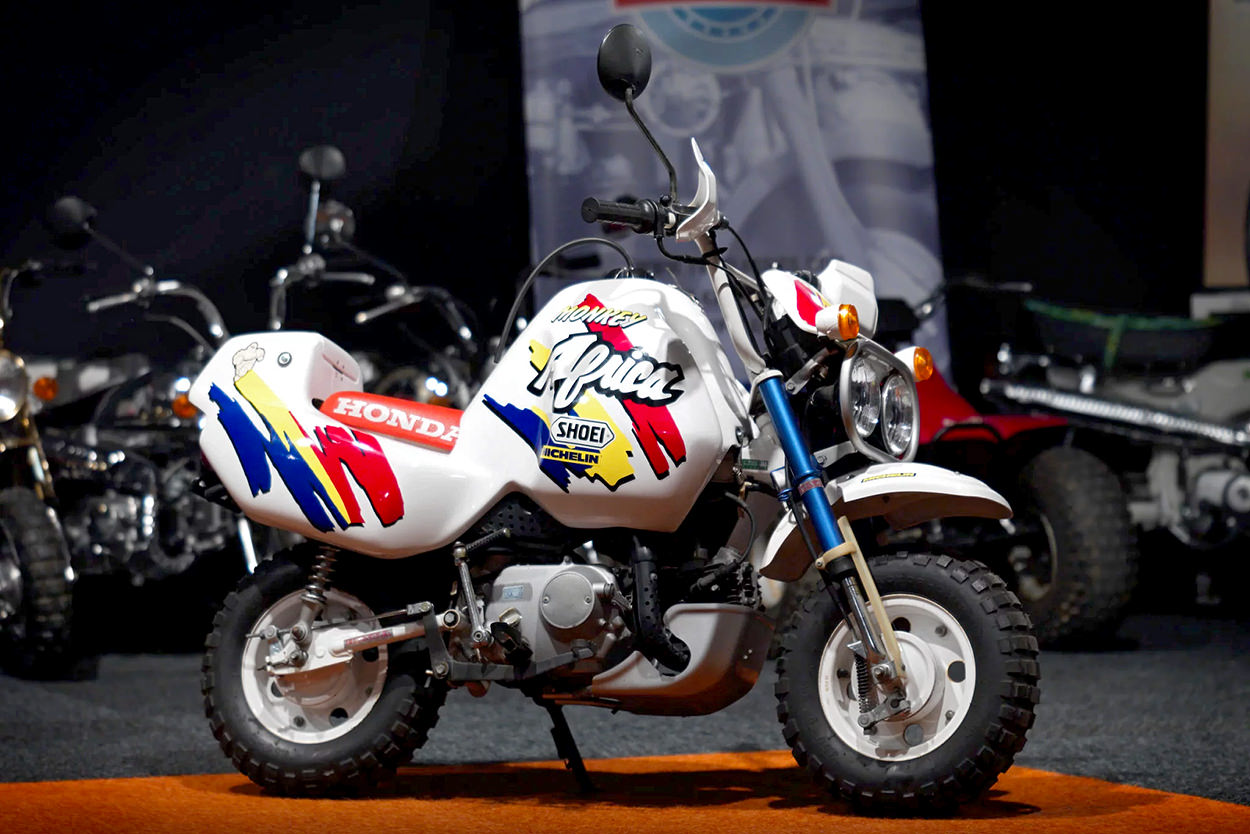 Honda Monkey ‘Baja Africa’ Honda has a reputation for being one of the most conventional motorcycle makers, but we have solid evidence right here that the designers are occasionally allowed to cut loose and upper management occasionally has a few too many single malts on a Friday afternoon.

In the early 90s, Honda made a ‘Baja’ version of the Monkey, with knobby tires, dual headlamps and an enduro-style seat. These bikes are now sought-after in the Japanese market, but still available for around US$4,000. 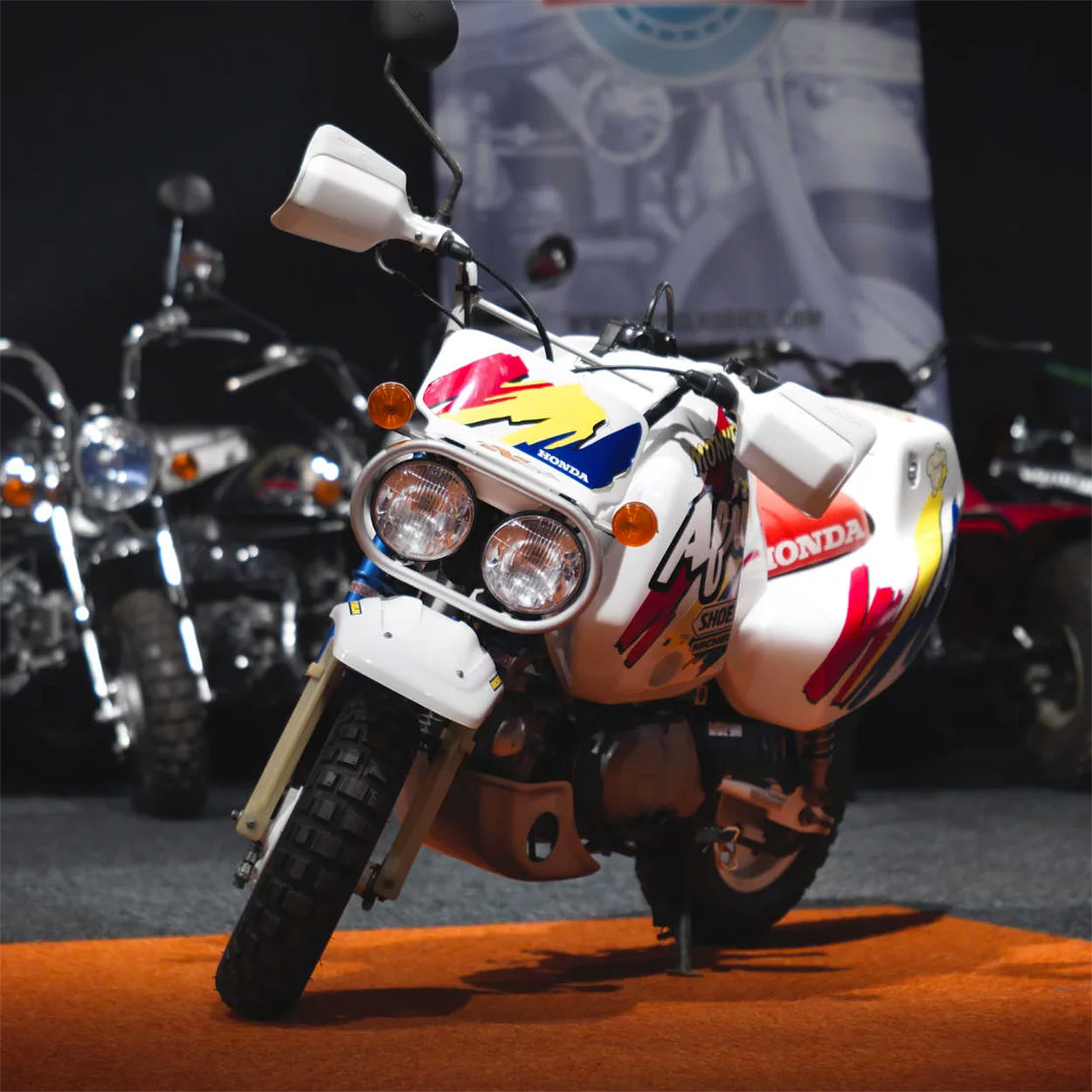 Then Honda went a step further and created a ‘Monkey Africa’ body kit, centered on a huge tank-and-seat unit that bolted straight onto the regular Monkey Baja.

It’s absolutely bizarre, and there’s a complete bike with kit now for sale at the Belgian dealer TVP classics. If you have 12,500 euros to spare (around US$13,800) and don’t take your motorcycling too seriously, this is the perfect bike for you. [Via] 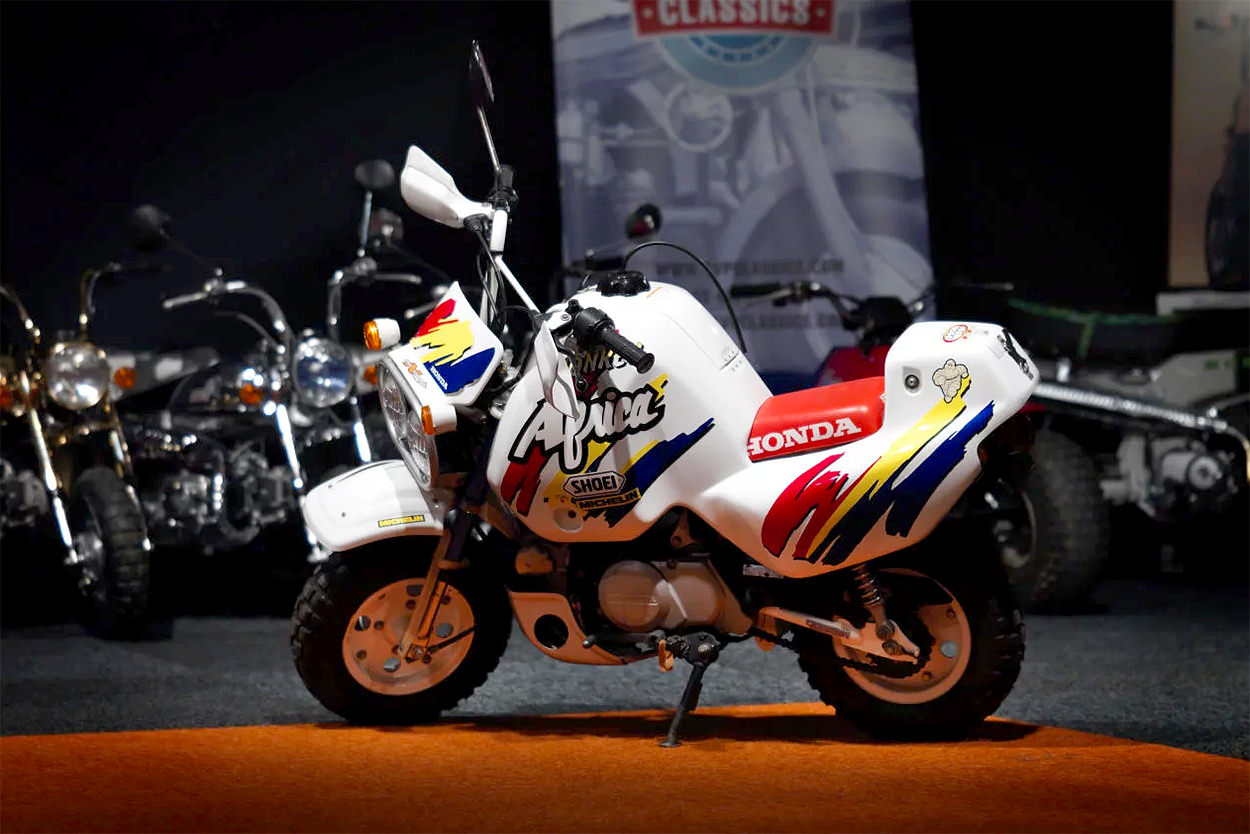 Written by Tim Huber. Existing today primarily as a novelty genre of sorts, sidecars are without a doubt one of, if not the most seldom-seen style of customs. Plenty of well seasoned shops have never ventured into the three-wheeled territory, and it’s not too hard to see why. The shift from a single-track vehicle to […]