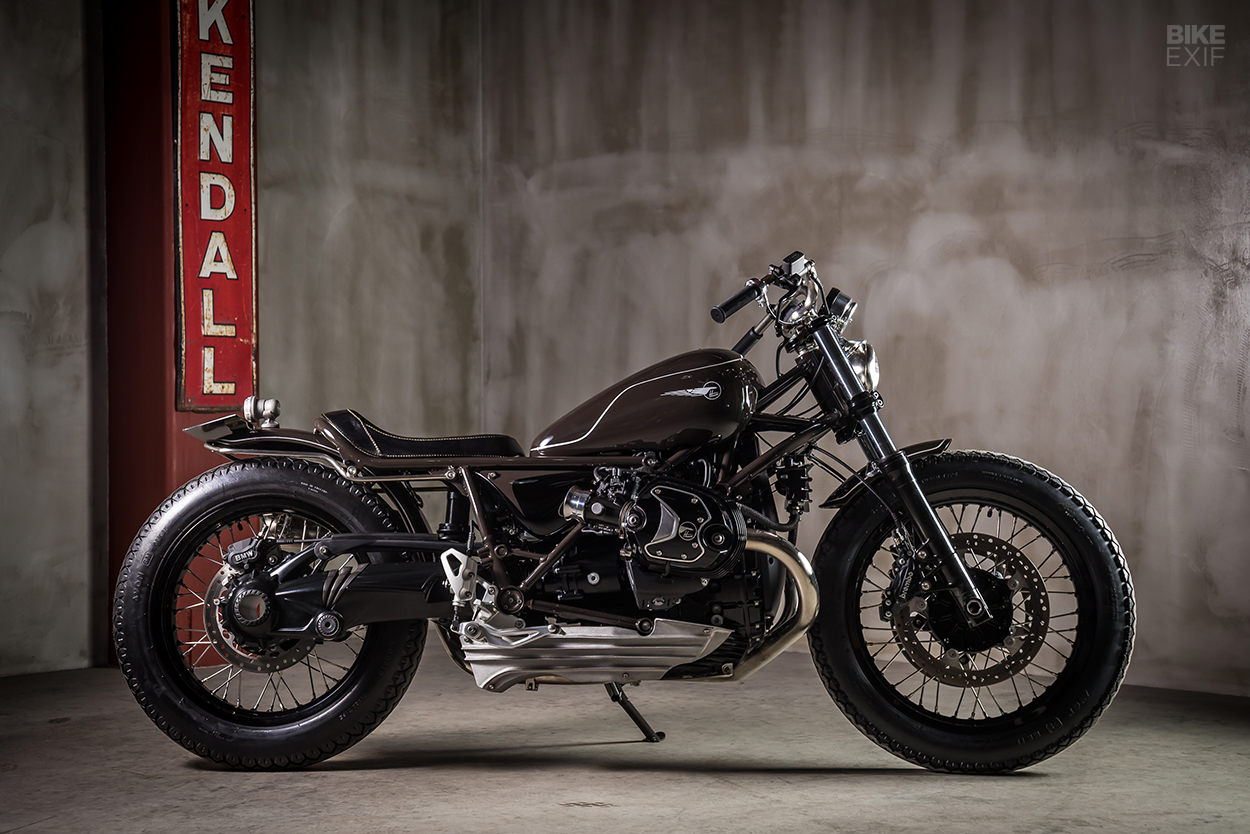 The best thing about the Japanese custom scene is that it defies all conventions. Stroll around the annual Mooneyes show for example, and sure, you’ll see plenty of choppers—but you’ll also see another realm of genre-bending machinery.

So while the rest of us argue about the differences between café racers and street trackers, Japan’s top builders continue to operate miles outside the box. 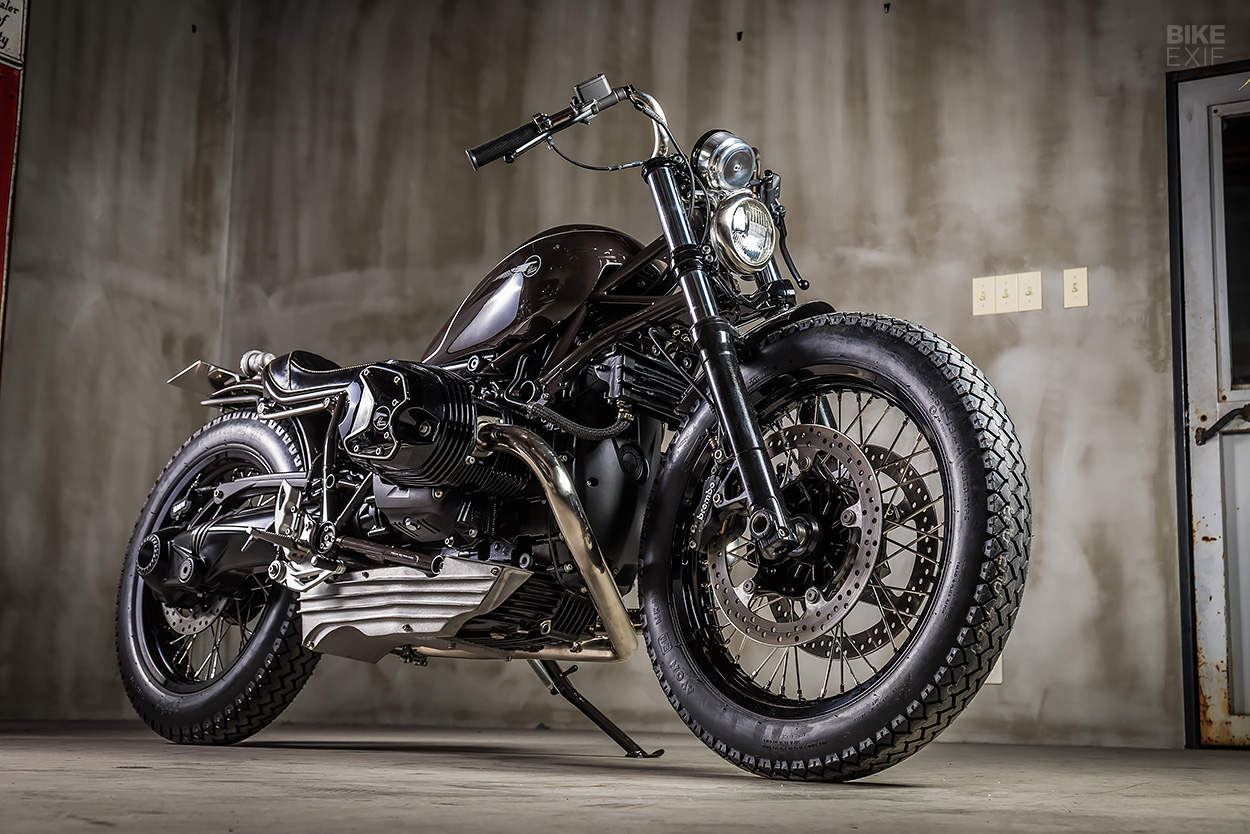 Just look at this glorious R nineT Pure from Hiroshima’s Heiwa Motorcycle—our second highlight from this year’s Mooneyes. It’s sort of a bobber, but it also has hints of classic American and British motorcycles.

And with a plethora of interesting hand-made details, it’s one of the most interesting R nineTs we’ve seen in a while. 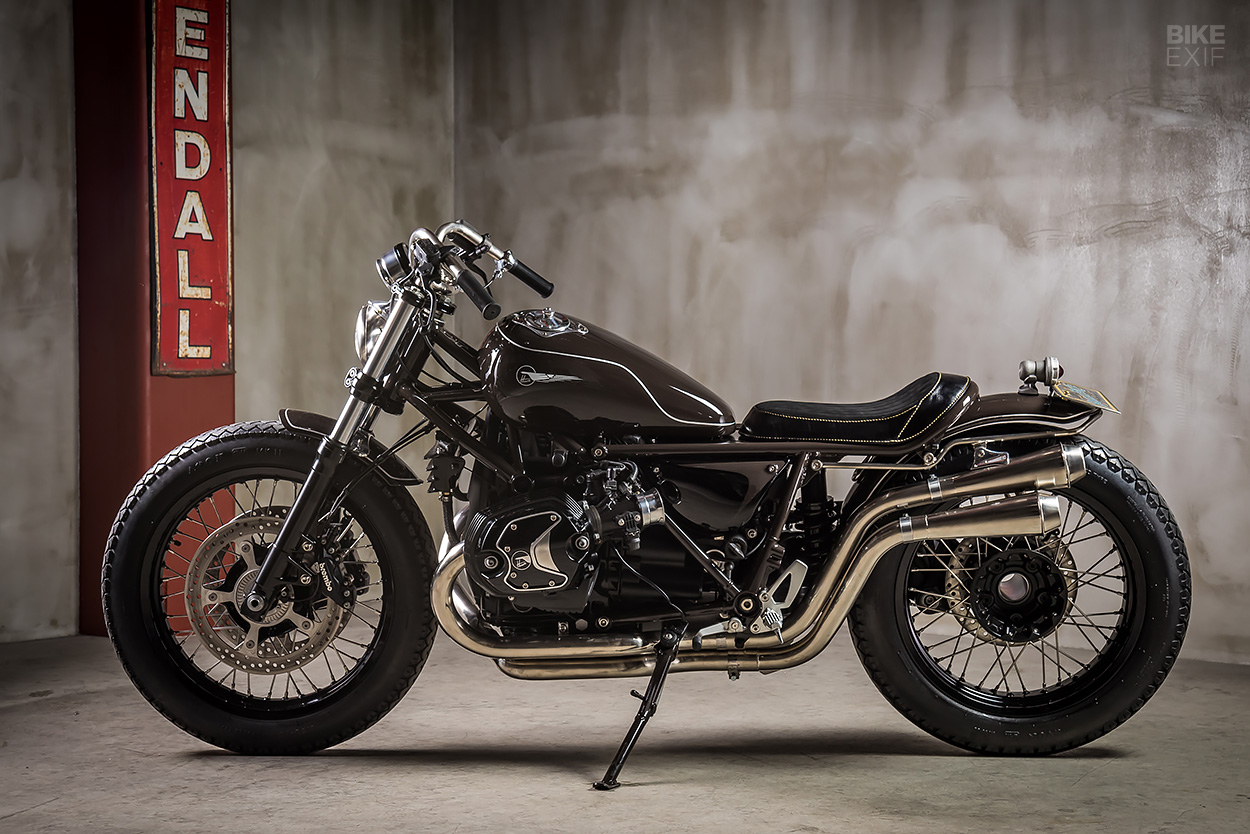 Heiwa main man Kengo Kimura calls his creation ‘Bull Face,’ and tells us it’s based on a 2017 R nineT Pure. As for whether he was aiming for any specific style, the always-eclectic Kimura-san simply replies: “A retro and stylish bike.”

“A style not found anywhere.” 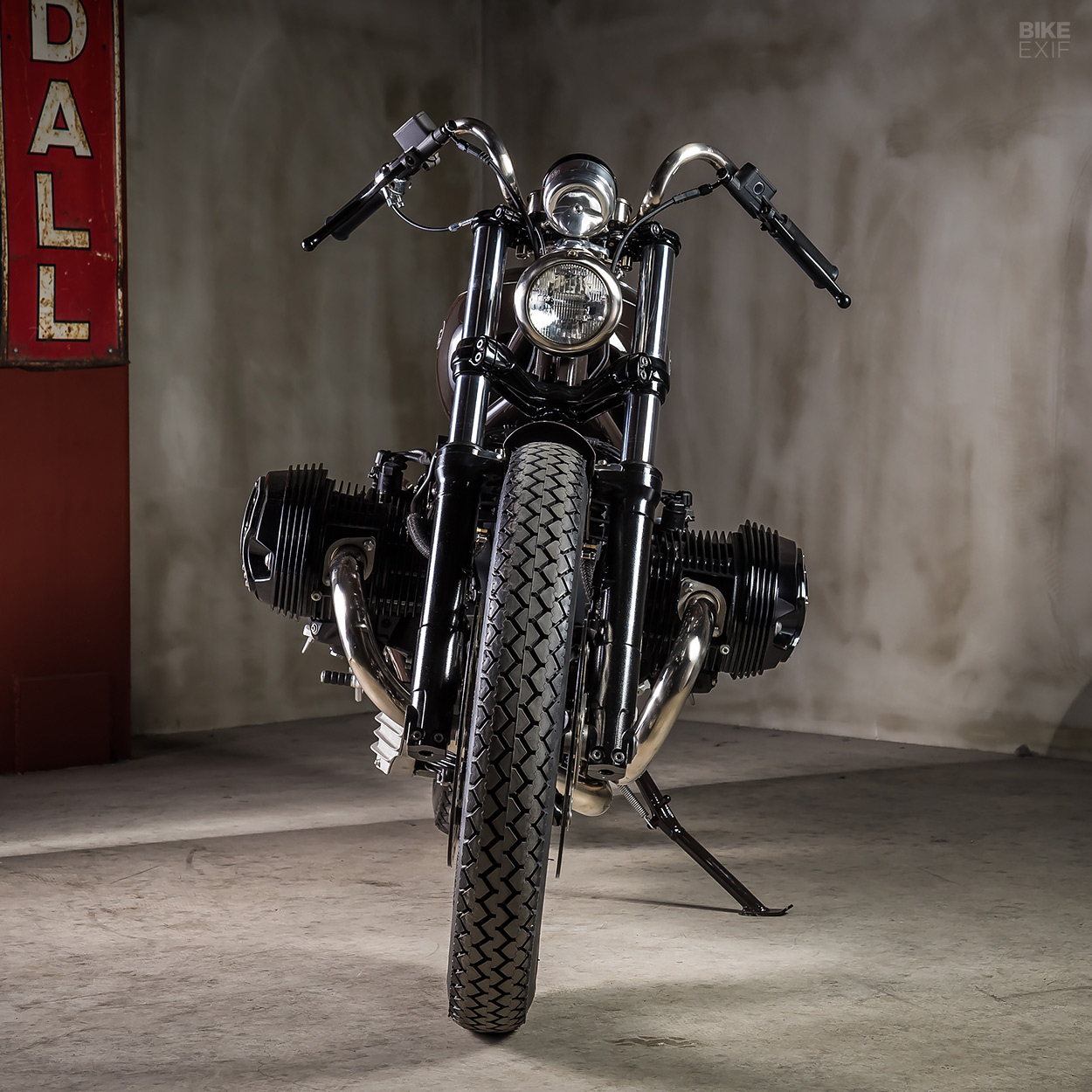 Bull Face has a pretty unique stance; it’s slammed, but it rolls on big wheels. To achieve this, Kengo shortened the OEM conventional 43 mm telescopic forks by a couple of inches, and fitted a shorter-than-stock Progressive rear shock.

The wheels are 19F/18R aluminum rims from Excel, laced to the R nineT hubs. The brakes are stock, and the tubed tires are vintage-style Avon Speedmaster MKIIs. 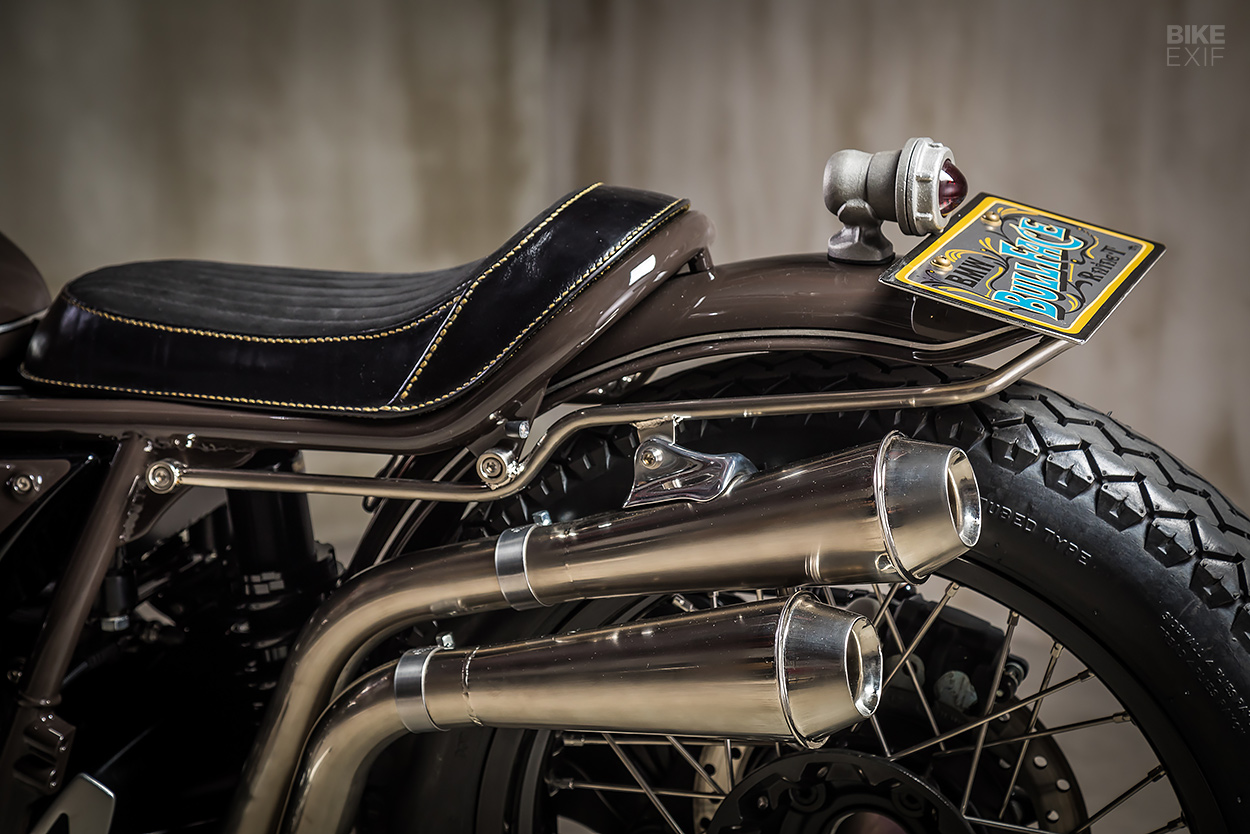 There’s some sweet frame work happening higher up. The R nineT’s frame is modular, so Kengo removed the bits he didn’t need, and fabricated new sections. By replacing the main rails that bolt on near the front of the bike, he was able to create a straight fly line to mount the bodywork on.

There’s a kicked-up loop at the back, complete with tabs to hold the rear turn signals, and a classy hand-made rail that doubles as an exhaust mount. Finishing off the tail are a custom rear fender and a Heiwa original taillight. 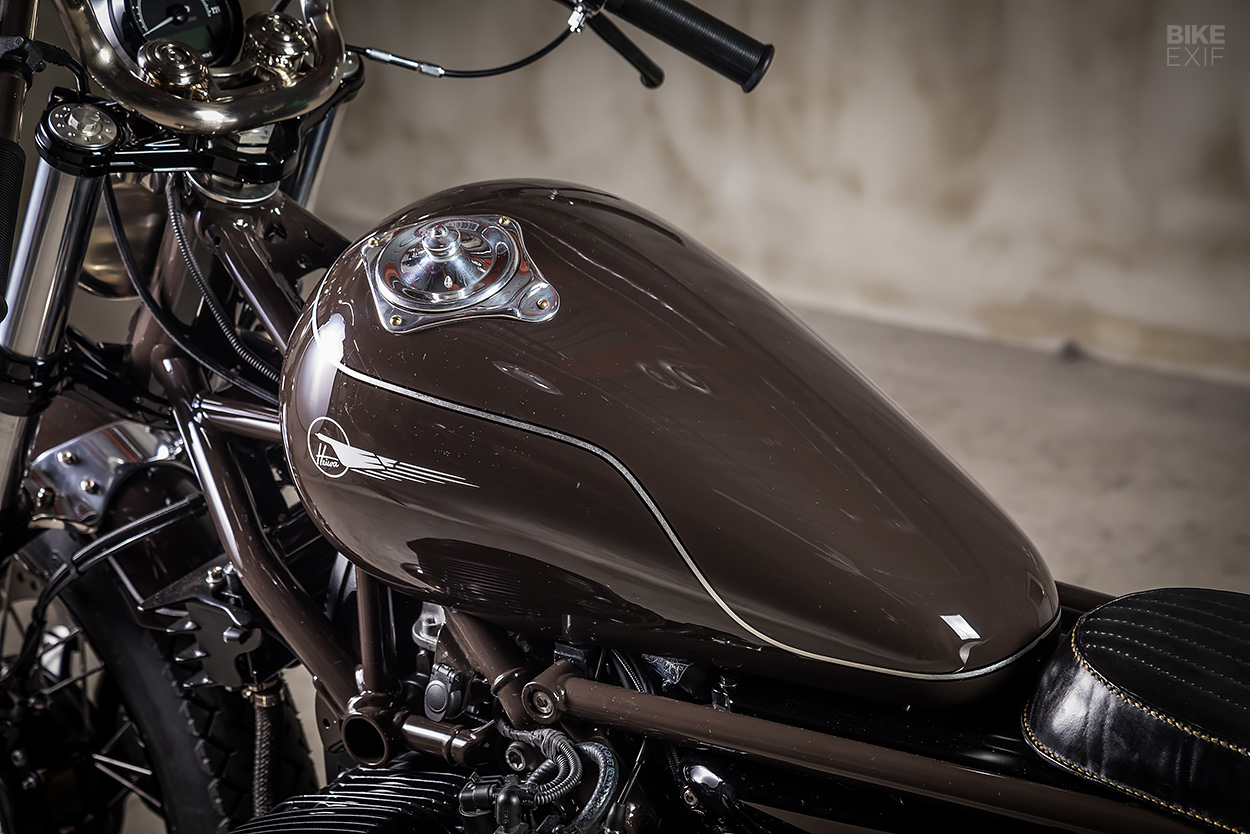 The new fuel tank arrangement is really neat too. Kengo fabricated an aluminum fuel cell that would tuck nicely into the frame rails, then built a classically-shaped cover to go over it. That ornate tank filler cap you see is more of a lid, which reveals the actual filler underneath.

Just behind it is an equally stunning seat. It’s sporting a twin-finish cover with contrast stitching, masterfully executed by Flavor Leather Work. 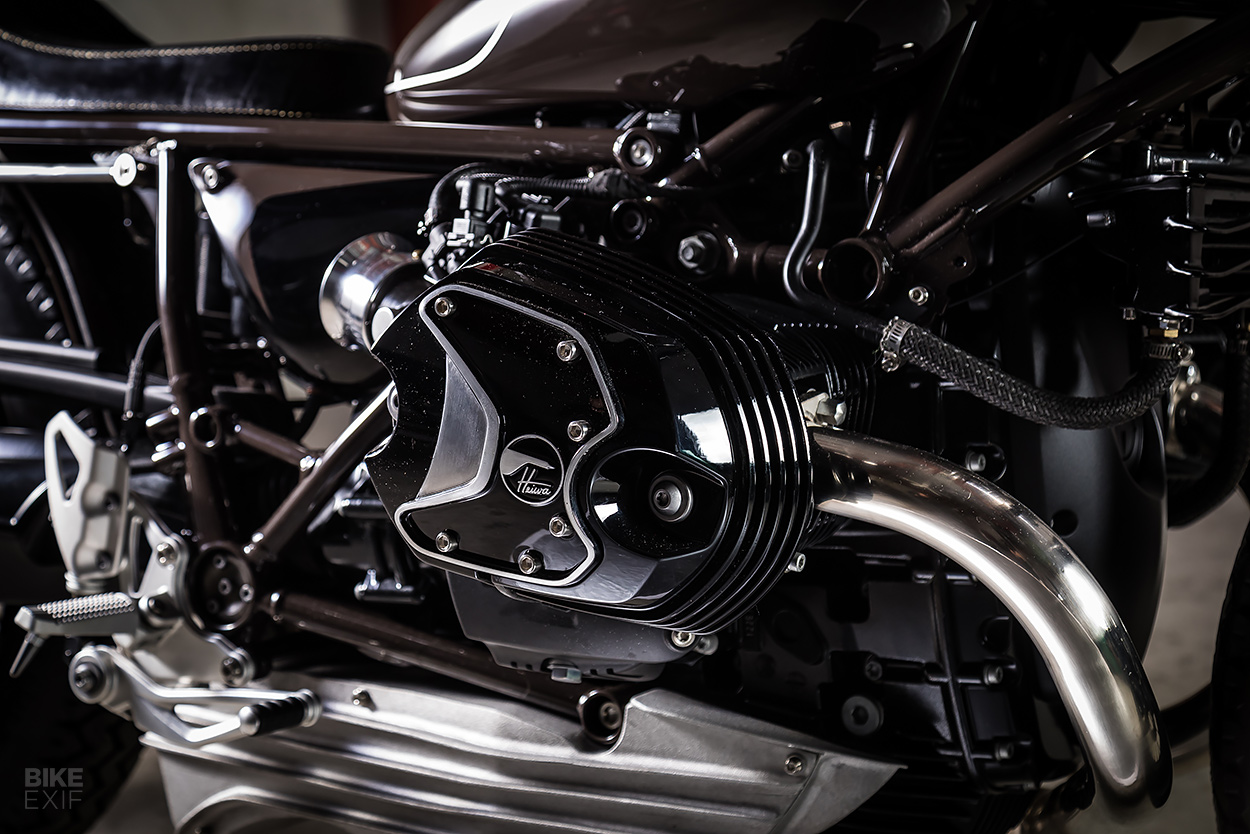 Kengo’s hand-made bodywork continues with a set of custom side covers, and a new front fender. The airbox is gone too, replace by a set of one-off velocity stacks. Look closely, and you’ll notice that he even machined his own valve covers for the boxer motor.

The detailing is impeccable, with contrast finishes and tidy Heiwa logos. 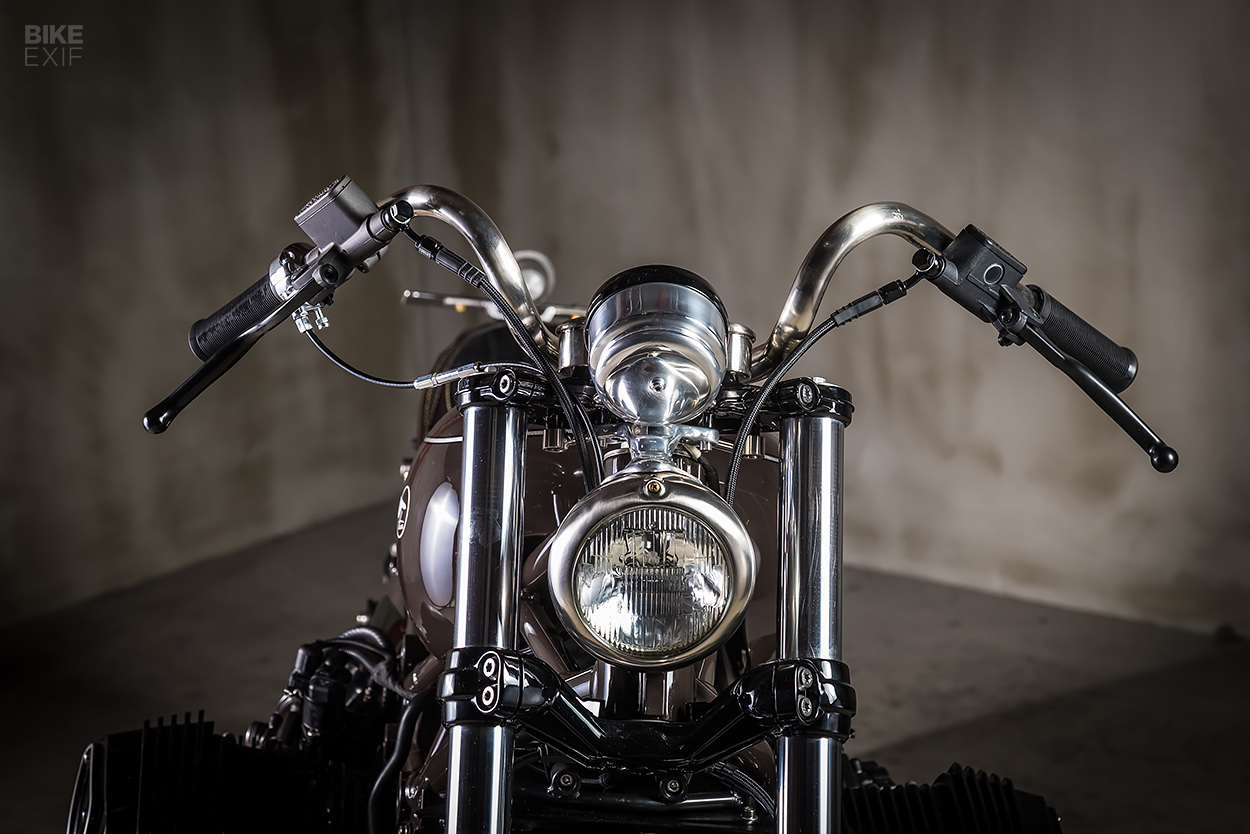 Up front, you’ll find a vintage headlight and a custom housing for the stock speedo, that takes it from something to hide to a feature.

The handlebars are custom, and mount directly to the BMW’s riser mounts. There’s a new throttle and vintage grips too, and the brake and clutch reservoirs have even been stripped of their original black finishes. 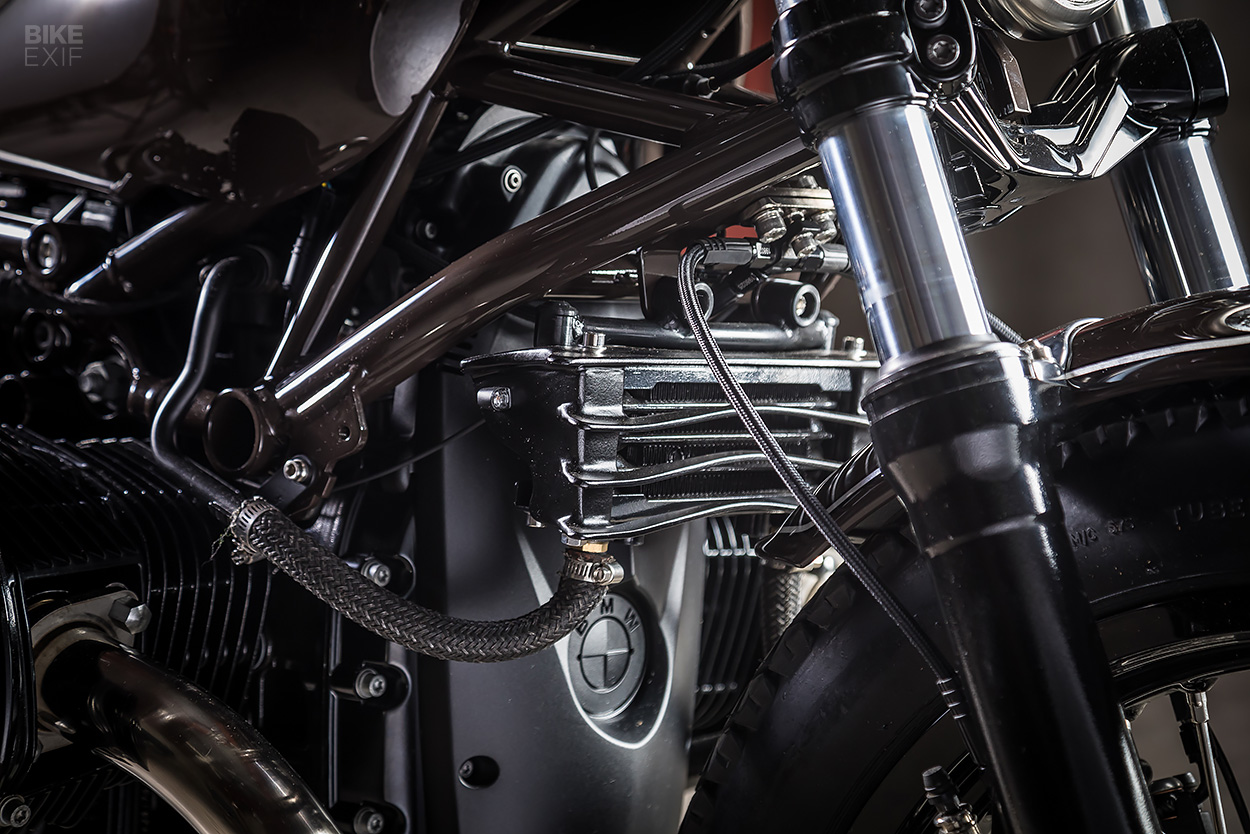 Peek under the hood, and you’ll spot a custom-made oil cooler, and a brake hose junction that’s mounted to the frame, rather than the forks.

We were convinced that this setup would cause issues, but Kengo assures us it doesn’t. In fact, he prefers it over the stock arrangement. 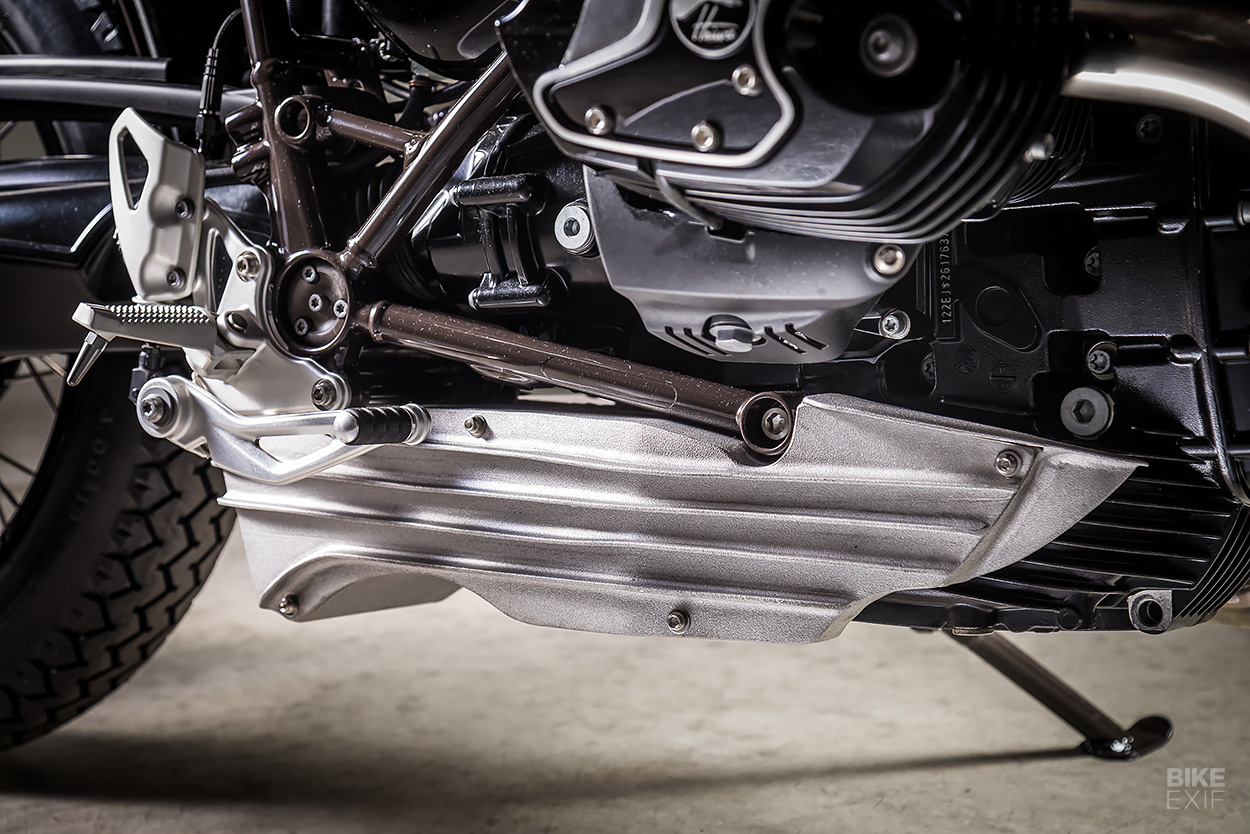 There’s some neat asymmetry built into this BMW’s design too. Lower down on the right, there’s a large aluminum spoiler that looks like it was sand cast. Kengo actually hand-fabricated it, welding on each fin individually. (It also hosts the electrics.)

On the left, the space is dominated by a high-riding twin exhaust system. It’s made from stainless steel, which was then nickel plated to give it this unique finish. 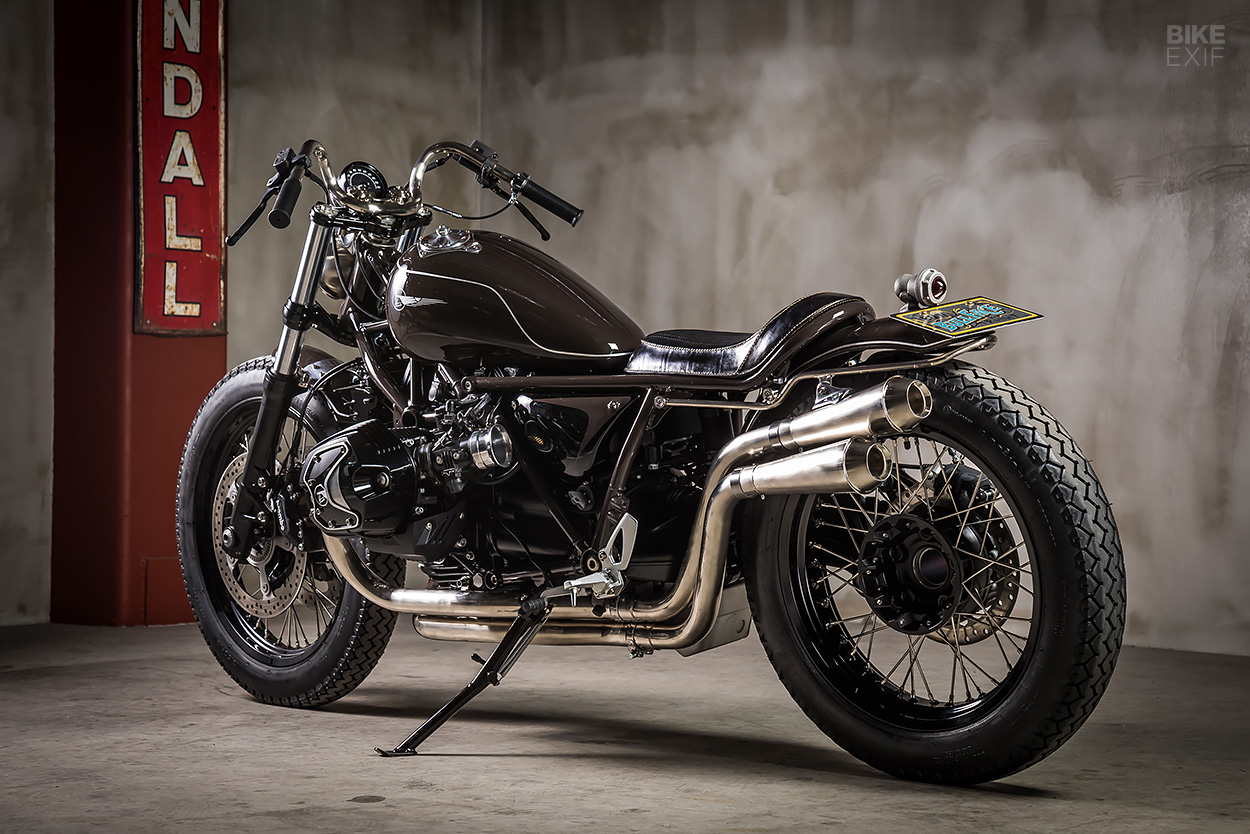 Everything else—right down to the frame—has been painted in a creamy chocolate brown hue. N2AUTO handled the paint job, finishing it off with subtle silver leaf striping and Heiwa logos, complemented by those one-off valve covers.

Bull Face is another home run from Heiwa, proof that you can’t pigeonhole Japanese builders, and yet another reason that Mooneyes is the show to attend. 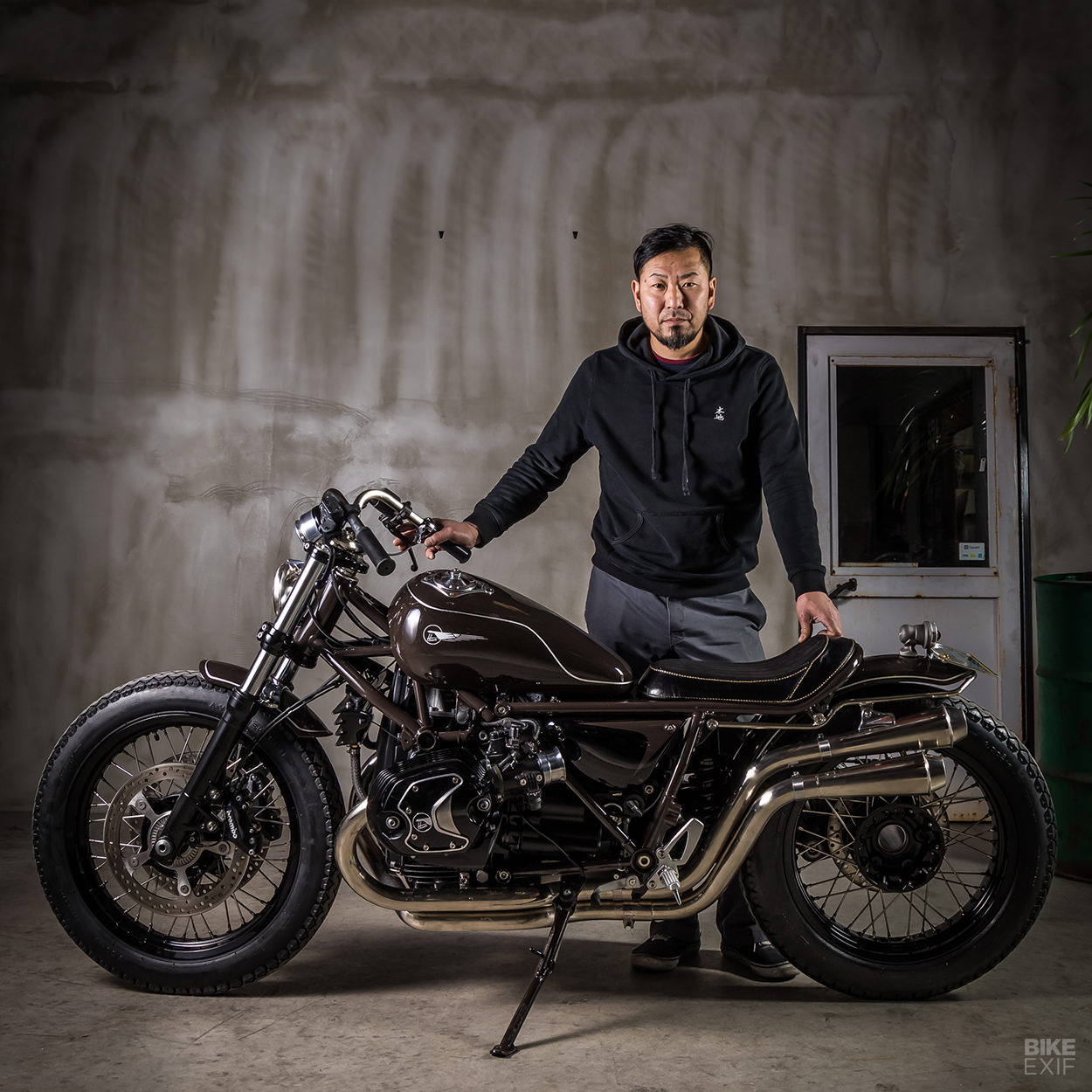 Revealed: The Top 10 Custom Motorcycles of 2019

It’s always the hardest article to write, but also the most fascinating to research. Our annual roundup of the most popular customs on Bike EXIF reveals the dominant trends in the scene as well as the builders who have their fingers on the pulse. This year, outside of the top two builds, the competition was […]

OUTSIDE THE BOX: BMW R75 ‘The Shark’ by Titan Motorcycle Co.

Written by Martin Hodgson The one thing you know about receiving an email from Titan Motorcycle Co. is you have no idea just what kind of custom bike you’ll find inside. The awarding-winning team headed up by Michael Siebenhofer and Thanh Ho Ngo relish in their role of turning up to a show and delivering […]